I've worked with and for the finance industry since 1997 and I've come to see most mortgage brokerages as a blur; that is, they tend to morph together and there's no real means of differentiating one business from any other. This article introduces the basics of sales positioning so you're able to more easily formulate a strategy to stand out in a sea of blue suits.

Ask most brokers what their point of differentiation is, or what sets them apart from other businesses in their space, and they'll likely talk about their support, lending panel, or customer service. These are not points of differentiation - they're attributes of most mortgage businesses that'll generally do nothing to make you stand out from the competition.

Differentiation (unique selling point, points of differentiation etc.) is closely related to positioning. Differentiation is the mashup of attributes that might describe how your product and/or service is unique, the first of its type, or some other distinguishing factor. A product or brand may have many points of difference, but they may not all be meaningful or relevant to the target market. Positioning, on the other hand, is more about how your brand is perceived in the minds of your audience. For example, we're seeing more and more brokers lay claim to a specialty in the high yield medico space without any real commitment to the industry except a few stock images on their website and a generic blurb on how they specialise in the area. Positioning your business is more about saying that you do something - it's proving that you are something.

A good example of sales positioning that has withstood the test of time is Dove beauty soap. Advertising agency Ogilvy framed the soap as a beauty tool for women with dry skin rather than a soap for working men (typical of the era). Good positioning can change the perception of a product or brand that is otherwise neutral, and even today - over 70 years later - Dove is still synonymous with 'Real Beauty'. 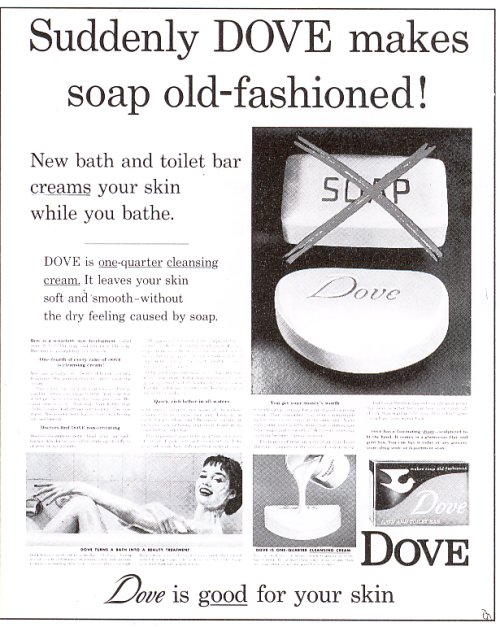 Pictured: A 1957 print advertisement for the Dove moisturizing beauty bar. All else being equal, a bar of soap is a bar of soap until you spin it into something else... and this 'spin' lends itself to positioning.

Through the decades Dove has consistently used the tagline of "One quarter moisturizing cream", "Dove won't dry your skin like soap can", and "Dove is good for your skin" - it isn't just soap. It was Ogilvy that looked for the product's point of differentiation - in this case stearic acid, the term used for "cleansing cream" - and positioned the brand around this point of difference. It's important to note that the difference was consumer-facing in that it made the advantage of their product very clear over their competitors. The brand later went on to to introduce the "Dove Face Test", real-women testimonials, and more recently the notion of 'Real Beauty' in order to further cement their brand's positioning in the mind of consumers. Dove's positioning is so effective that the style of branding has become known as the 'Dove Effect'.

states that "... we've been working to make beauty a source of confidence, not anxiety", and the company is actively promoting the #ShowUs hashtag ("more women who look like me"). This approach to positioning is interesting in that they're creating a movement around their brand rather than directly positioning their product.

Another example of positioning a brand with a movement comes to us by way of VW's early advertising for the beetle. Bill Bernbach

of Doyle Dane Bernbach (DDB) positioned the car with an emerging hippy and hipster movement as anti-establishment. The positioning of the vehicle went against the grain of the gas-guzzling muscle car and/or luxury marketing of the era. 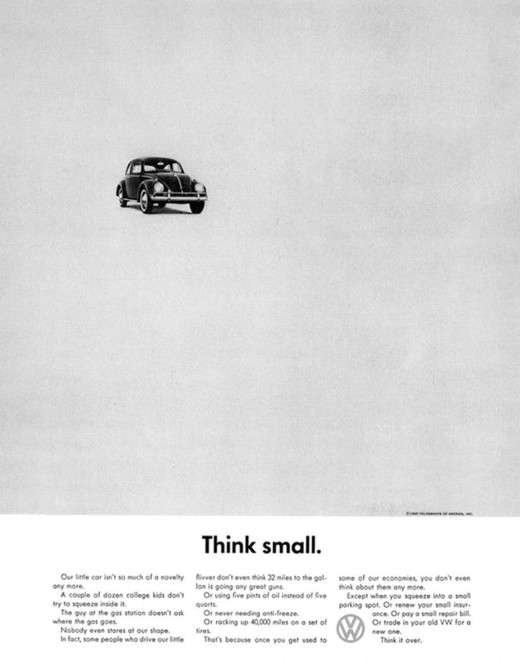 Pictured: A 1959 print advertisement for the Volkswagen beetle.

David Ogilvy made the following statement with regard to Bill Bernbach's campaign:

"To advertise a car that looked like an orthopedic boot would have defeated me. But Bill Bernbach and his merry men positioned Volkswagen as a protest against the vulgarity of Detroit cars in those days thereby making the beetle a cult among those Americans who eschew conspicuous consumption."

Using the Dove and VW examples as a benchmark it's difficult to isolate a single broker business that has clearly positioned itself in the same way. Aussie might come close with its abandoned "we'll save you" tagline... but it's still more of tagline than an established position in the market.

In an article on satellite webistes we introduce the concept of standalone websites and landing pages, and how this contributes (in part) to Brand Segmentation. Yabber provides early segmentation motivation via the satellite sequence by way of a dedicated equipment finance website for our clients (yet more complimentary value!). Brokers don't want to dilute their primary website with an abundance of automotive information (as it potentially compromises upon their positioning if featured in significant ways)... but ignoring that segment of the market would be a reckless endeavour. The equipment website permits our brokers to positions themselves as equipment experts and capitalise on that market. Of course, positioning within the equipment market might also be necessary to further refine your audience.

Once a brand has successfully positioned itself it's difficult to shake the association, and we're careful in that we segregate our finance website and marketing products with those products outside the finance industry; in fact, we don't need brokers to know we work with any other industries and this isn't important to them. While it's not always ideal, breaking your business into multiple brands is an effective means in which to retain a broad reputation while having a clear specialised presence that targets specific markets (think of it as split testing your business).

website we've operated for a number of years (since 2002, in fact, but in further development at the time of writing). The website, having generated billions in business volume, was always directed at emergency service employees, nurses, doctors and military. However, simply saying that we're experts in a particular field isn't enough. Those that provide a niche service should have a working knowledge of relevant industries, pay structures, culture, and understand exactly what products are most appropriate. Further, a relationship with certain banks or lower-tier lenders is imperative so you're able to provide a service that is genuinely superior to any other. When I was promoting the '000' product myself I'd spent 7 years working with the NSW Fire Brigade, 5 years in various police forces, and I'd worked as a pilot for the Royal Flying Doctor Service, so I'd worked a trifecta of emergency services which shaped a unique understanding of the emergency services market, and was part reason for the program's early success.

The fact we operate the Police Home Loan service from the generic domain of police.com.au contributes towards its positioning in the market, and it certainly doesn't hurt in terms of credibility.

Note: After passing the PHL website from broker to broker over the last 5 years we've recently 'partnered' with a single broker that is positioned to manage the service without our intervention (beyond promotion), and we have a specific plan to reach market saturation this year. The site will promote a very specific product designed at a very small consumer market. The assignment of these programs to brokers is made to those participating in our managed Platinum Program.

Positioning in the case of our 'Triple-0' products means that our product will essentially provide the same products but be delivered in a way that provides exclusivity. Positioning can have a consumer perceive that one service will outperform another simply by clever branding (by creating a belief that one product is different from another... even if not entirely true).

After I had worked as a pilot for over 20 years, and after my career as an airline pilot on the Boeing 777 and Boeing 737, I introduced a finance program to capitalise on my connection with the aviation industry. What followed was nearly 350-million in volume in around four months. This program worked for one reason and one reason alone: we positioned ourselves as aviation experts with a suite of products that made refinancing or borrowing with us an easy decision.

If you're using generic templates or a library of advertisements for your paid promotion you're literally throwing away the opportunity to be creative and create a real brand presence. We'll tell our brokers over and over that multiple versions of the same advert in a Facebook feed is unlikely to have a profound effect. Even if you're not positioned in a totally unique manner your advertising creative and copy should absolutely be unique and set you apart from the mediocrity (we talk about bad Facebook advertising and horrendous generic YouTube advertising in our fourth podcast, "Rescue Package").

"You won't be interesting unless you say things imaginatively, originally, freshly". There are still brokers utilising paid promotion that are misled into using generic cut-and-paste templates. From our point of view this segment of the misguided broker community provides us with an advantage because they're a means of comparison (they make us look good).

"It may well be that creativity is the last unfair advantage we're legally allowed to take over our competitors." - Bill Bernbach

If you're not being creative you're boring and generic. Don't be misled into thinking any library of adverts is a good idea. The same applies for lead magnets and your broader customer experience; if it's not uniquely positioned to add real value then it's generic and boring - simple as that.

"If it doesn't sell, it isn't creative" - David Ogilvy.

Advertising reflects the mores of society - it does not influence it. Position in your market and speak with your audience directly.

Ask any marketing company what positioning is and they'll probably all return a different answer. Positioning, branding, points of differentiation, unique selling points etc. will often all blur into a mashup of confusion. The secret sauce to real positioning in the market is to have a clear strategy around how it'll be achieved, and then molding your business to support the desired perception. Simply saying you're something isn't enough, and wanting to be something will get you nowhere.