Over the last two weeks I've been on the receiving end of a relentless campaign by Design Sharks (Australia) - a company that provides logo, video, and web services. Every time I unsubscribed to one of their emails it seemingly has no effect (and I'm subscribed with multiple email addresses) so I decided to do a little digging. After a few phone calls to their Australian 1-800 number to verify their bona fides I thought I'd share my experience in the hope it prevents any Aussie businesses from being sucked into their deceptive sales funnel.

I receive emails and phone calls every day from East Indians and other foreigners that offer a variation on the 'web design' theme. If you're silly enough to use them you're normally setting yourself up for a financial hit. They'll often purport to be a local business and more often than not they'll offer a service detrimental to your ends... or they'll simply scam you. It's a sickening practice but it's usually transparent and easily identified. Sadly, however, theses unscrupulous marketers find their audience in the mix of business people that simply don't know any better.

(and broader Google Map products) since it introduced the service. The idea is that location scammers will have themselves represented as a local business despite having no connection whatsoever with the location they claim to be based. Google addressed the problem

(and a potential means to mitigate the scam listings

) in April, 2017, although as is the case with almost all online verification methods there are means for fraudsters to navigate

The emails I received from Design Sharks (a foreign company) included a web address that linked to an Australian website giving the outward appearance of an Australian business; they had an Aussie domain name, Australian-based 1800 number, and a local physical address. Given their what-appeared-to-be local presence I looked into their background to validate their local claims.

Keep in mind that providing local phone numbers and websites for various global regions is encouraged; the practice in and of itself is typical and expands local brands to an International audience. Building landing pages for national and international locales is also something we'd advocate... but we don't endorse deliberate deception as Design Sharks have done. What bothered me about Design Shark - as described below - is the business using various fake Australian locations to manipulate search results

and deceive people into believing they're dealing with a truly local business. Further, they continue to live by the lie of local offices despite overwhelming evidence proving otherwise. It's the last point that tends to confirm their fraudulent intent.

The initial emails I received from Design Shark indicated that the business was located at 170 Clarendon Street, South Melbourne, while their primary website indicated that they were at 48 York Street, South Melbourne. Another one of their .com.au websites, logodesigninc.com.au, shows them at 251 Collins St, Melbourne - all of them large commercial office blocks. I spoke to the office managers of all the buildings they claimed to occupy and was told by each of them that they'd not heard of Logo Sharks, Design Sharks, or Logo Design Inc (just some of the names they're using to promote their Australian presence), and there weren't any businesses that occupied the buildings that had any connection with the services I had described. Additionally, there weren't any Australian business names or companies registered on the ASIC website that matched any of their forward-facing business names.

I looked into any and all reviews of their (Australian) services and quickly determined that using the company was fraught with danger. I read one obscure reference online where a user claimed that upon subscribing to their "specials" SMS notifications they were in fact subscribing to a premium service that was costing them around $25 per month. I didn't have the gumption to validate that claim with my own phone.

Knowing that they weren't who they claimed, I thought I'd give them a call. The 1-800 number I called redirected to an American-sounding voice. After I asked the gentleman on the receiving end of the phone if I had called their Melbourne office I was told that "all calls redirect to their head office"... which is likely their only office somewhere in California (I'm assuming they're based in the USA but it could just as likely be India or the Philippines). I told them about my email problem, queried their physical location, and asked to speak to somebody in their marketing department. I was promptly put on hold. When the call disconnected after 45 minutes of waiting I called back only to hear the same gentleman mumble indistinctly before simply hanging up on me.

This company has clearly built a manipulative facade to have Aussies believe they're dealing with a physical local presence. While they may have a legitimate company behind all the manipulative deception, one would have to be seriously deluded to think their dodgy marketing practices didn't translate to all areas of their business.

Australia's Most Trusted Design Company. I call BS on this claim.

I didn't have enough faith in my assessment after just one phone call so I contacted them again using a dodgy accent best described as a mix between Russian and Irish (it wasn't good). I told them I was in the foyer of 251 Collins St. and wanted to know what floor they were on so I could come and see them about website and logo design. The gentleman refused to provide details saying that they dealt mostly online and didn't accept appointments. After telling them I'd wait while they called their Melbourne office to have somebody meet me in the foyer, he came back after a short time on hold and immediately asked for my credit card number, wanting to charge me $200 to simply make a booking (keeping in mind it was a booking fee for an appointment they had no means or intention of honoring).

I suspected at one point they may have had agents or affiliates in the listed locations but my redeeming theory proved to be false. I also considered the notion that they were using registered virtual offices but this also proved to be false.

All of the building locations referenced in their copy are being used as fake placeholders to improve their presence in Google Maps, manipulate their SEO score, and mislead local Australian businesses. Listing multi-story buildings as their physical location without indicating their office number makes it difficult for individuals to validate their occupancy.

To obtain social proof that might dispel some of the mounting evidence against Design Sharks, I called some of the customers whose logos were featured on the front page of their websites. No company I called could verify that any of the company aliases had anything to do with their website or logo designs. Conducting a reverse search on images attached to testimonials returned either stock photography or, in a few cases, images 'borrowed' from other websites (for example, a girl wearing glasses was lifted from Specsavers).

While I normally just delete scam emails this particular case caught my eye simply because they were particularly good at disguising their criminality. Their fraudulent practices are well-crafted and will likely lure a number of Aussies that prefer dealing with local businesses. While they operate primarily (as best I can tell) from designsharks.com.au in Australia, they also use logoventures.com.au, logodesigninc.com.au, and a few other local domains. From the little research I made into the matter it seems they have multiple websites all over the world purporting to occupy a local office. I found dozens of other international websites that all had a fake local address in common (logoshines.co.uk and logoroyale.co.uk are just two of many). As best I can tell they don't have a local presence in any of the local areas that they claim to serve.

I receive dozens of emails from this company every week - often from bookwritinginc.com, websitesdesigninc.com, logodesignmonsters.com, and countless others. All pages have a fake countdown for expiring offers and a popup showing the 'last 9 coupons left' - two techniques that go a long way to defining (or confirming) their lack of cultural honesty. There are other similar emails I've received that link to websites that are stylistically similar and also show a fake address - videoanimationinc.com appearing to be one of them. Video Animation Inc lists 2619 Wilshire Blvd, Los Angeles, as their operating address (Wilshire Royale Apartments) yet, once again, the building manager has no record of the company operating on its premises. There are enough differences in some of the websites that they create and emails they send that create the illusion of another brand. Like almost all of their websites the 'sample' logos used appear to be lifted from elsewhere and the reviews are seemingly from people they've simply invented.

This kind of deception is nothing new and Design Sharks (or whatever they happen to be calling themselves) is just one example of a commercial style of fraud that does a good job of projecting the illusion of legitimacy. Sadly, Design Sharks have what appears to be a good model that would likely work exceptionally well if honesty and integrity were at the core of their business model.

When it comes to any digital services it's important to take appropriate steps to ensure you aren't dealing with, well, sharks. 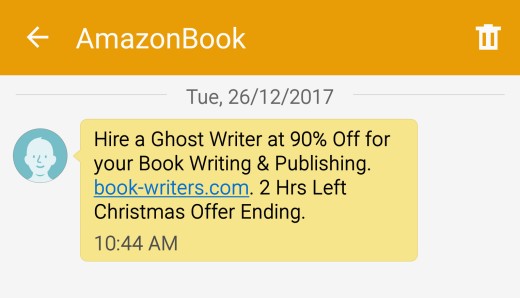 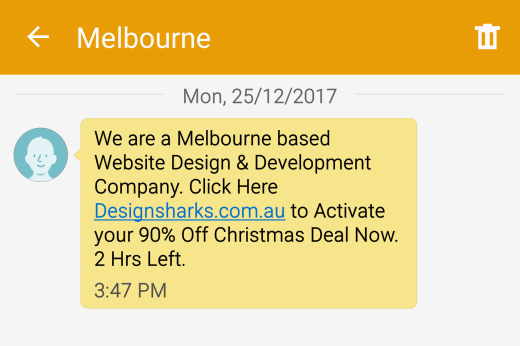 Their emails continue to flood the inbox of every email account I own. The following is a screenshot of my personal email. 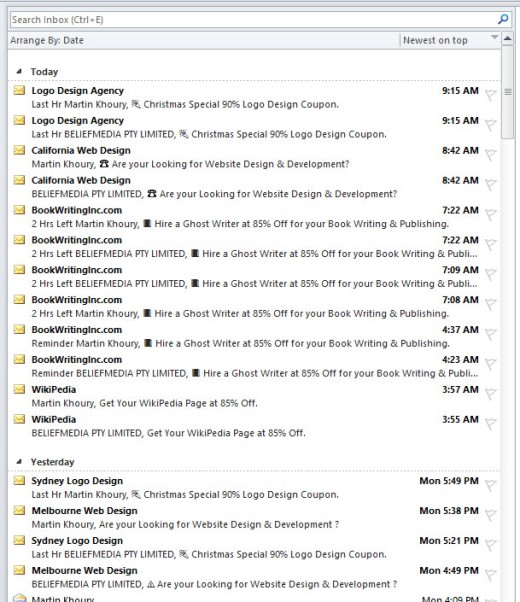 A number of people have emailed me directly or submitted a message via our contact form. One example message is as follows: 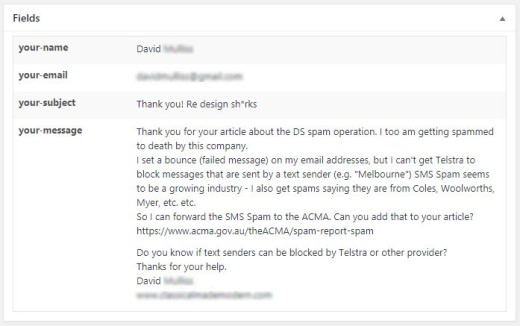 Sadly, the phone providers can do very little to prevent the messages. In fact, the major telcos are somewhat complicit in facilitating the frauds that'll unwittingly subscribe you to premium services. While some providers will send you a message before subscribing to a 19-prefix premium service, Optus will simply opt you into their costly programs (as they've done with me). This raises the additional concern for me that Design Sharks have somehow opted me into a premium service without my consent (as noted above) since their number won't show on my screen and there's no option to return a message.

The company in question has continued to send me up to 30 messages a day via a number of our emails. The last week I've receievd a number of messages purporting to come from GoDaddy. Screenshot below. 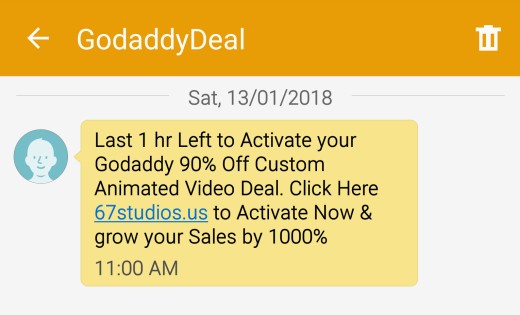 I've spoken to GoDaddy and they assure me that they have no affiliation with the company.

The parent company behind the unsolicted campaign appears to be Pakistan-based abtach.com. From what we're told, you will not get a service for your investment; they are well and truly a large-scale scam.

If digital marketing has done anything over the years it's led to the demise of all the business practices that takes place outside of the web. BeliefMedia has an extensive offline component to our marketing that, in an of itself, can cause a higher return before we even consider implementing our digital programs. Unlike virtually every other marketing agency on the planet we'll get to know your business backwards... and this includes regular visits from your relationship manager. You can be assured your dealing with local experts.