I went to a small Google developer day a few years back where the focus was clear: mobile design. Head designers from the Sydney office all presented their case for mobile optimized websites before responsive design became the accepted norm. They were pushing for a m.domain site designed exclusively around mobile content. While Google developers too much away, they made it clear that there were (expected and fairly obvious) search algorithms

that would be updated to ensure that mobile optimised websites would be given a higher ranking than those that weren't.

", and they've steered away from the m prefix

(as a primary user experience) in favour of responsive design. It all sounds rather pedestrian these days but back then it was new for a lot of people. Learn a little about responsive design from Google here

It wasn't until February 26, 2015, 2015 that we saw significant news from Google indicating what many called Mobilegeddon

(the Mobile Update). Starting April 21st, Google expanded their use of "mobile-friendliness" as a ranking signal. This change affected mobile searches in all languages worldwide and had a significant impact on their search results.

Depending upon which report you choose to believe, around 51 percent

of all online usage is through 'apps', while 60 to 70 percent of digital media time spent in the U.S is conducted on a smartphone or tablet. Whatever report you choose to read, the implication is clear: mobile usage is on the rise and, in almost all cases, it has overtaken desktop usage for the consumption of information (rather than creation). In May 2015, Google posted an article

stating that more Google searches take place on mobile devices than on desktop computers in 10 countries - including the US and Japan (supporting the anecdotal evidence everywhere that people will use mobile devices because of the immediacy and convenience the handset provides).

As marketers and business people, it's become clear that a mobile marketing and advertising strategy is essential in your planning.

This article was originally published on Internoetics in 2015. It's followed by a number of mobile specific articles that deal with SEO, WordPress code, and other features that'll build upon the mobile experience.

Despite having clear knowledge that the mobile Gods were set to dominate mankind, and armed with knowledge of the impending changes provided directly from the source, I was probably a little lazy in implementing changes myself. Amassing over 900 quality websites over the years meant going back over properties that were created in an era that predated the iPhone. Many of my web interests were created when Nokia dominated the mobile market. While the process has proven to be problematic, migrating many sites over to WordPress was of serious benefit because of the speed that relatively unique and responsive designs could be deployed quickly and easily (more on this later).

Google provides the following advice on mobile specific content (not necessarily responsive design). Their approach is generally a standardised one shared by the majority of other search engines (not that they matter, right?).

Google doesn't favour one URL format over another (m.beliefmedia.com versus www.beliefmedia.com) as long as they are all accessible for all Googlebot user-agents. It's expected that corresponding pages on each 'website' (mobile versions versus desktop) will have the exact same content.

No www or www?

Google treats beliefmedia.com and www.beliefmedia.com differently. Without a canonical tag to the corresponding page, your site may be penalised for duplicate

. While WordPress tends to handle this, other PHP applications won't generally honor any particular rule. You should update your .htaccess file to force one or the other. For example, to force www, as we did with the soon-to-be-retired icoFav website, use the following code:

although this can't be relied upon in isolation.

On your desktop page, add a link rel="alternate" tag pointing to the corresponding mobile URL. This helps Googlebot discover the location of your site's mobile pages. On your mobile page, add a link rel="canonical" tag pointing to the corresponding desktop URL (so they won't see it as duplicate content). While Google supports the annotation in both HTML pages and sitemaps

, it's recommended that you use both.

Google's example of a desktop rel tag (pointing to a mobile version) is as follows:

The corresponding mobile version (if a separate m. site should be as follows (and must be included). The same canonical tag should also be included on all versions of the same page (referencing the same source page):

If you automatically redirect users' from a mobile to desktop version of your site, and vice-versa, you should treat Google in the same way. Google supports HTTP redirects (prefers a 302 temporary redirect) and JavaScript redirects but notes that the latter causes some latency in fetching your page.

To redirect a mobile visitor to a mobile site (but prevent a visitor to your mobile site on a desktop or tablet) is up to you. While Google suggests allowing users to choose the redirect you offer, they have no preference. I prefer to offer the user a choice of site that they'd prefer to visit after first delivering them to what is deemed most relevant. In fact, on most of my m. optimised sites I offer a link to the desktop (or mobile version) of the same page on every page.

. The funky little tool will let you know what your site looks like to Google and whether they deem it to be "mobile friendly

Google lists a number of common mistakes. They are as follows:

Of course, the biggest mistake we all make is building something without a broad consideration to the user experience.

The User Experience and Responsive Design

The terms UI (User Interface) and UX (User Experience) are often thrown around the web without serious consideration to what it essentially means. In short, it refers to a compromise in design that's focused on the end-user experience without unduly influencing the potential conversion that you're trying to make. I use the term "compromise" because that's the premise for which virtually all responsive designs are built. Responsive WordPress themes are desktop designs that just happen to work on mobile devices. We squeeze everything up into a single column, whack on a new menu, and that's about it (secondary sidebars usually get squeezed up with content and we usually don't discriminate on what content, however relevant, we serve). It's not a true mobile experience (although we're moving further and further towards it with good touch designs and conditional content).

The problem with an independent or standalone version of a mobile website comes from the cost associated with design and updates. Maintaining two websites serving content that can be easily accommodated in a relatively pleasant manner by a responsive design is a difficult ask. However, for larger corporations or ecommerce stores (as an example) a separate mobile entity is almost always a better proposition.

Should You have an App?

on his or her mobile device per day. Flurry state that browser usage represents just 14% of the US consumer's time, or just 22 minutes per day... with the remaining time spent on downloadable apps. The mobile browser has been relegated to 'just another application' among the other application-specific software. 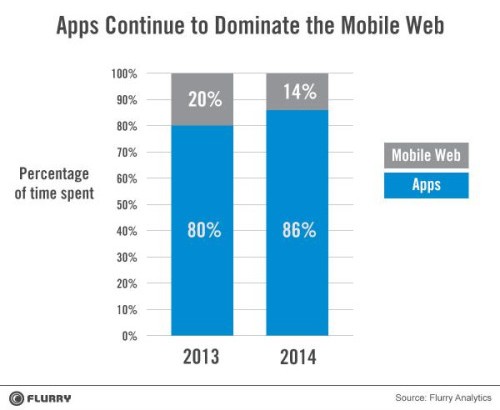 'The browser has become a single application swimming in a sea of apps' - Source: Flurry

If the graph is to be believed, browser-based usage is in serious decline, while apps are slowly evolving into the "New Internet".

As advertisers, Flurry make mention of the "time-spent is the timeless currency". This means that you should generally allocate advertising resources based on the potential return it provides; so since Facebook commands 17% of usage, you should allocate 17% of your budget to that platform. That said, a sound marketing strategy will determine what platform or arena will generate a better return on investment - since some platforms perform better for your market than others. 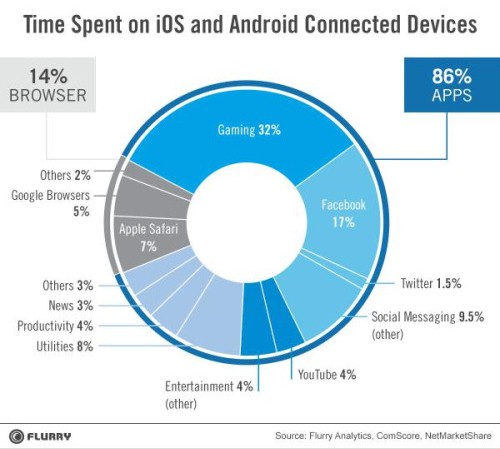 As creators of content, it's the decline of the browser that should concern us the most. However, it's the big social services that tend to dominate time - with news and other platforms representing a small portion of the app market. If you do have an app, it should be more functional and feature-rich than your website to generate ongoing traction. There's no serious benefit that comes from simply replicating your website within an app when a richer experience is derived from a browser.

Anecdotally, there's serious merit in the research suggesting that before time and money is spend on a dedicated app, one can tap into the already established markets dominating the consumers' time by committing to a presence on Facebook, Google+, Instagram, and Twitter. This is where your people are spending their time... and this is where you'll find them.

Functional websites such as Pizza deliveries, e-commerce stores, or for other services that require a great deal of user input, an app might be a wise investment.