In the aftermath of Nicole Kidman's Etihad

have enlisted Friends actor and Hollywood actress Jennifer Aniston to star in their new TV commercials showcasing the new private shower suites on board the A380.

Following Kidman's TV commercial, many were quick to criticise her for supporting the Government owned airline well known for their poor treatment of female crew. The National President of the Association of Professional Flight Attendants, Laura Glading, wrote to Nicole Kidman on behalf of the 25,000 American Airlines members that it represents, asking her to withdraw her support, stating that the carrier was "... well-known in the industry for their discriminatory labor practices and deplorable treatment of female employees". A WeSupportNicoleKidman

to amend their "Open Skies" agreement to limit Gulf Carriers into the U.S market.

The Gulf region (both Abu Dhabi, where Etihad is based, and Dubai, where Emirates is headquartered) regularly attracts adverse attention because of claims the culture and Government supports and openly encourages Islamic legal practices.

Aniston is being criticised not only because of the support she is lending to the foreign carrier, but also because of the middle finger she metaphorically gives to other U.S carriers by the very deliberate and snobbish mockery of the service they provide. Watch the TV commercial below.

The commercial shows Aniston (mocking her persona as a celeb) wandering into a dimly lit galley area behind closed curtains where American employees are seen to be hidden away eating and talking (a very obvious upper-cut at their service) and then, after asking where the showers are, Aniston's mortified to learn that they don't have one... or a bar (while the crew start to laugh hysterically). She wakes up from the dream of mediocrity most of us live every day and recounts the nightmare experience to a bartender in an upper class bar. 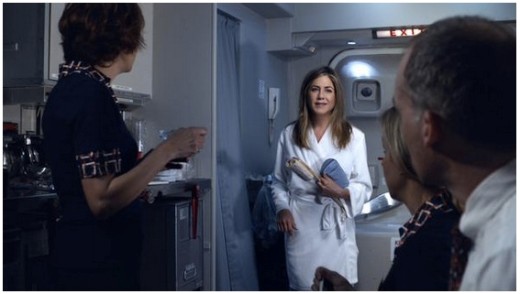 Poor Jennifer can't find the shower. But she can have peanuts and a hot towel...

The tagline? "Wake up to flying as it should be". That is, of course, if you can justify around 35 thousand dollars for a return trip between JFK and Dubai.

While the spot is intended to be humorous, the bashing of American airlines has left many asking why Aniston would agree to the narrative in times when industry relations

between the two countries is poor.

lent her brand for the purpose of marketing, or poked fun at her celebrity status, but she's never confronted the palpable anger from those in her own country as a result. While the video has enjoyed success on YouTube since it was posted

, disapproval is evidenced by half of all ratings being negative - overwhelming social proof of the negative perception from a large percentage of viewers (Emirates have since made the video private).

were commissioned with the account. The advert was directed by Oscar-nominee Bryan Buckley

, known in the industry for his Super Bowl commercials. Aniston is rumoured to have pocketed about 5 million for the project, adding to her estimated 150 million dollar wealth.

The global digital and television campaign will begin in the United States and the UAE before being rolled out in November to other countries where Emirates has a big operational presence - including the UK, Germany, France, Italy, India and Australia. Emirates has, to date, invested US$20 million in securing TV spots worldwide for this campaign, which will have a 30-second and longer 60-second version.