A short time ago we published an article where we showed how dodgy marketers would often use generic advertising, illegal lead generation, and "catch-all" landing pages originating from fake finance business to capture leads. The leads are then used to subsidise poor-performing Facebook programs, as free giveaways in Facebook Groups, or they'll be bundled up into "buy now" packages. The charlatans, or those that simply don't know any better, seemingly ignore the plethora of heavily-enforced legislation that underpins all financial marketing - some of which is introduced in this article.

In the honest and ethical world of finance marketing, we're still seeing a large percentage of brokers manufacture advertising that is non-compliant, or use advertising in a manner that wouldn't withstand ASIC scrutiny. When advertising is outsourced, we find many marketers will invest resources to ensure they comply with Facebook and other platform-specific requirements, but they'll often ignore the array of legislation that dictates how financial advertising should be presented. Certainly, there's a heavily-promoted and extremely poor-performing $2000 'program' floating around the market that promotes non-compliant advertising and emails - potentially leaving brokers liable for prosecution and/or heavy fines. Sadly, though, this is just one example of marketing representation holding brokers' hands into a realm of utter non-compliance.

I personally feel that as an industry that places its reputation and existence on compliance, we shouldn't diminish the role of our digital presence or assign a lesser importance to compliance in the marketing space. Digital is every bit as important as your internal business compliance... but it's often a weak point in your business armour that potentially leaves you liable to prosecution. If ASIC ever decides to pursue marketing non-compliance with any vigor we'll likely see a large number of brokers before the chopping block.

This article is far from any complete resource.... and no guide ever is. A good understanding of all the applicable legislation is the only means of ensuring compliance. However, we'll focus on those areas where we see the majority of infractions.

The applicable legislation that applies to financial advertising is significant. The following is a non-exhaustive list.

It's not feasible nor possibly to list all the relevant requirements imposed by legislation. However, both ASIC and the MFAA have published their own guidelines.

The latter ASIC document is rather comprehensive although the MFAA provides a suitable summary. There are numerous other Government resources, such as those provided by the ACCC

Generally speaking, the following and most basic principles should be adhered to. They're just a few of the numerous recommendations made by ASIC's Regulatory Guide, 234.

The comprehensive RG234 document should be read it full in company with relevant legislation.

It's interesting to see ASIC note in section RG-234.147 of their RG234 document that "... promoters should be particularly careful about using a facility for a consumer to access additional information where an advertisement is on a third-party site, rather than an advertisement on the promoter's own website". This include leadpages, ClickFunnels, and other similar sites. ASIC says that consumers "will have less motivation to actually access that additional information" but they make no mention of the more significant issues associated with privacy and business risk. Using third-party sites - even as a DIY option - is something that should almost always be avoided because it potentially violates Australian Privacy Law and the implied requirements of a Credit Licence. Of course, no self-respecting marketer will ever recommend these sites... but despite this, we're still the only financial marketers we're aware of that provides a fully-contained and integrated on-site experience. From a marketing point-of-view, sending a consumer to a website other than your own is simply absurd.

All email marketing campaigns and social media must also fully comply with legislation... and it's one area where common sense and compliance often fails to apply. For this reason alone template-based emails will never work because they're not structured to take your business practices into account. Some templates will also populate testimonials and other fake information.

The nature of the image associated with an advert is beyond the scope of this article, but it's worth noting that using a 'celebrity image' is against the Code. If you've ever used an image of Arnold Schwarzenegger or a screenshot from Breaking Bad (two that we see more than any other) you're not only liable for damages imposed by ASIC, but also those by independent artists and film studios. If you do have a legitimate celebrity endorsement, that celebrity should have a true working understanding of the product. Again, and while it might seem obvious, any image you use in an advert for any purpose must be licenced - never simply use Google Images . A recent example of a fine imposed upon a broker by violating copyright comes to us by way of a Real Estate agent that sued a broker for using one of their home images in an advert without permission. We spoke to the broker involved in the dispute and his defence was that his marketer had told him to Google and image that looks like it's a Brisbane property (see more on images in our introductory article on "Creating Better Facebook Ads"). This broker's (non-compliant) copy-and-paste template-based First Home Buyer advert was posted to Facebook Marketplace but ended up costing him thousands in damages despite no return whatsoever from the exercise.

It's prudent for brokers, accountants, and financial advisers to read all applicable legislation. While the RG234 is comprehensive it's still far from thorough. Lesser known examples of the Credit Regulations (2010) even dictate the colours to be used on product Key Fact Sheets. While most product fact sheets are manufactured and disseminated by banks in compliance with the "style guide" incorporated into the Act, larger white-label aggregator products and those produced internally (or outsourced to marketing groups) are often produced without regard to legislation. 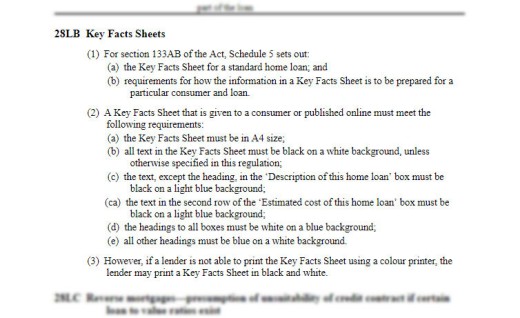 Advertising record keeping and compliance will progressively be policed in a manner not unlike that which is most often applied to other areas of a finance business. This means that every advert to make its way online - or any edit to any advert - is required to be kept on record (something we've always done). As per RG 234.149, and further detailed in the Act, all advertisements (including associated landing pages, disclaimers, etc) should be archived should any future dispute arise regarding the advertisement. We do this for our clients and always have done (it's in the Act, after all). Is this something you're doing yourself? 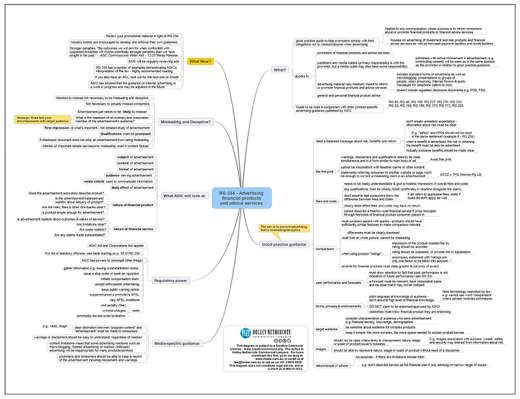 RG 234.151 acknowledges that the Internet is changing at a pace that'll require ongoing amendments. We're seeing more and more cases of 'misleading' or non-compliant advertising making their way into the courts, and this is creating precedents that dictates the ongoing and evolving nature of the RG document.

If you're outsourcing your marketing, ensure that you're not dealing with somebody that has ever hinted at "free leads", or anybody that provides packages, or a lead return guarantee. Seeing the "leftover leads" message in a Facebook group of similar is an indication that you're dealing with a charlatan... so steer clear. Legislation doesn't normally permit ignorance as an excuse so having an intimate understanding of your lead generation methods is vital.

While ASIC's mention of third-party landing sites is limited to one of trust, the industry has evolved to the point where fully integrated landing pages are essential (again, we're the only finance marketing experts to provide such a feature). While integration offers numerous benefits - not the least of which is a massive boost in conversions - it's the only manner in which to provide a true full-stack marketing funnel experience, and it provides your business with direct oversight, ownership, and control. Those ridiculous and superfluous third-party landing websites are the scourge of the respectable marketing industry; if this is what your marketers have provided you it's time to seriously rethink your marketing representation.

We understand that our approach to business growth and lead generation isn't for everyone... so if you're in that camp but would like some good recommendations for a company that provides a good service we'd be happy to point you in the right direction. There are a large number of really good media and marketing agencies in the industry that will guide you through fully compliant and high-yield ethical campaigns that are entirely consistent with financial guidelines (just none that we've seen sharing the finance space). The irony of financial marketing is that you would normally see better results, and be better protected legally, if you enlisted the services of a company that doesn't claim any specialty in the financial market.

Marketing and advertising is meant to be an exciting endeavour that embraces your business brand and sets your business apart from the vanilla competition. As we've said over and over, finance has to stop accepting mediocrity and non-compliance as a standard.