Every now and again there’s a print advertisement in the airline world that makes you question the intent of the marketing company. The following is one of them. The following banner is located on an escalator at Muscat Airport. 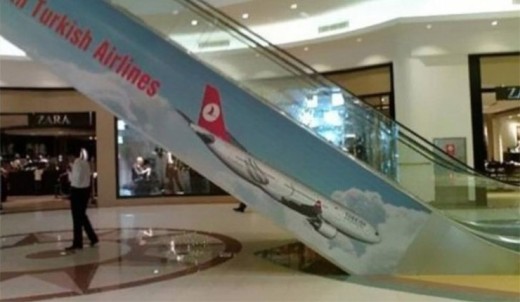 Is any publicity good publicity? Ryanair seem to think so… but I’m not sure that Turkish Airlines

would compromise their relatively good brand at the expense of a short live viral photograph. A number of people obviously overlooked this error. It’s essentially a demonstration of ‘Reasons (Swiss-cheese) Model’ in the advertising arena leading to an incident that could have been easily avoided if anybody stopped to question the stupidity of what they were doing.

based in Muscat. The flip side of the escalator displays the same images in reverse, so the aircraft is climbing rather than crashing. The image was apparently taken down after two days.