Home About Us Our Name

We’ll often have people ask us what BeliefMedia means. First, while the word “Belief” often forges itself into daily vernacular as something associated with religion or faith – this is not true for us (unless you consider marketing to be a religion!).

Belief is often defined as “… the state of mind in which a person thinks something to be the case, with there being empirical evidence to prove that something is the case with factual certainty”. It’s this definition that comes close (but not nearly close enough) to describing our name’s intent. While we have a core understanding of subject matter and produce truck-loads of empirical evidence to support our claims, our partners often fall back onto the belief that their marketing budget or subscription will be managed efficiently. Belief is on the ‘certainty scale’, and it is our clients’ belief in our brand promise that is often the metric that initially matters in the way of truth.

The media industry – particularly areas such as Facebook advertising management – has seen the proliferation of charlatans and thieves that won’t come close to delivering the results your require. For this reason, the objective truth of marketing is often overwhelmed by the subjective experience. Just like a belief system, their faith in results is often compromised. If you’re one of these people, you really do need to talk to us.

Beliefs are sometimes divided into core beliefs (that are actively thought about) and dispositional beliefs (that may be ascribed to someone who has not thought about the issue). It’s our partners that normally fall into the latter group; those that haven’t got the experience or expertise to predict results, while Belief Media falls into the former group (our beliefs are truths). Our belief is predictable… we believe the sun will rise tomorrow because we know it to be true; if it was your first day on Earth, you may not be so sure.

The concept of belief presumes a subject (Us) and an object of belief (the proposition, or a marketing concept)… in a sense making us “preachers” in the marketing and social space. With ongoing exposure to results-driven marketing it’s our goal to turn you into a believer (of truth). Results don’t lie.

As discussed by philosopher Plato, “Justified true belief (as opposed to opinion) is a definition of knowledge that gained approval during the enlightenment, ‘justified’ standing in contrast to ‘revealed'”. In essence, the concept of justified true belief states that in order to know that a given proposition is true, one must not only believe the relevant true proposition, but also have justification for doing so. In modern terms, this translates to not only having analytical data and our experience to support a claim… but one must also experience results.

In the context of Ancient Greek thought, two concepts are identified with regards to the concept of belief: pistis and doxa. Simplified, we may say that pistis refers to “trust” and “confidence”, while doxa refers to “opinion” and “acceptance” (the English word “orthodoxy” – meaning “accepted theory” – derives from doxa). It’s these words – trust and confidence – that we consider core values of our brand.

While some say that belief has the purpose of guiding action rather than indicating truth. In marketing terms, that guiding action is sometimes all that we can rely on; some campaigns work – others don’t. 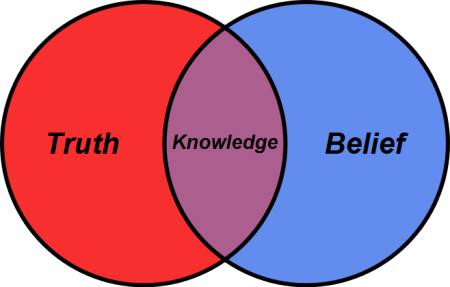 Belief & Truth. More knowledge we have, the more truth we gain (Wikipedia).

From our point of view, belief means “lack of doubt”. Marketing, sales, and online behavior is a science we understand. Belief is a truth if you have knowledge to support it.