John Gaunt’s ‘Tragedy By The Sea’

His 1955 award-winning photo entitled "Tragedy by the Sea" depicted the morning of April 2, 1954 when his neighbours, young Hermosa couple John & Lillian McDonald, stood together beside a violent sea that had just taken their infant son, Michael.

Gaunt was unaware of the circumstances when he took the photograph. The couple in the photograph lived locally and, although Gaunt did not know them, he knew people who did.

Gaunt's daughter told the LA Times back in 2011 that despite the acclaim, “the image was hard for [Gaunt] to bear at first.” She noted that Gaunt was just 31 when he took the photograph and had a 3-year-old daughter at home.

The photo made the front page of the LA Times the morning after it was taken. As well as the Pulitzer, the photograph won an Associated Press Managing Editor's Award, and a prize from the California-Nevada Associated Press. 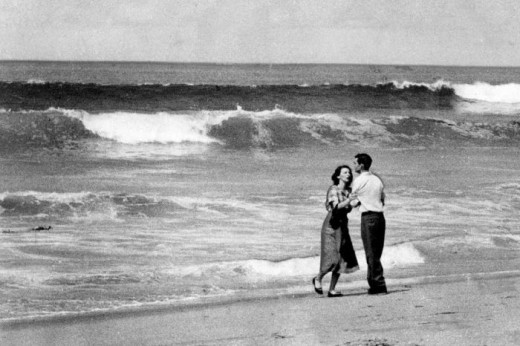