U.S. President John F. Kennedy (with his back to the camera), U.S. Attorney General Robert Kennedy (far left), and actress Marilyn Monroe,on the occasion of President Kennedy's 45th birthday celebrations at Madison Square Garden in New York City. Arthur M. Schlesinger is at the far right. Facing the camera in the rear is singer Harry Belafonte. Taken 19 May 1962.

Marilyn's sudden death at just 36 years old shocked the nation " in part because just three months prior she had given one of her most famous performances. Decked out in a skin-tight, nude-coloured dress, she sang "Happy Birthday" to PresidentJohn F. Kennedy, who was turning 45 later that month, at a rally at Madison Square Garden. The performance remains acultural touchstone decades later, and is also noteworthy because that event produced what is considered the only known photograph of Monroe and Kennedy together.

The image, shown here, was taken that night at an after-party at the Manhattan townhouse of Hollywood exec ArthurKrim, by official White House photographer Cecil Stoughton.

The performance added to rumours that both Kennedy brothers were having affairs with the actor (all but confirmed by way of the JFK files). 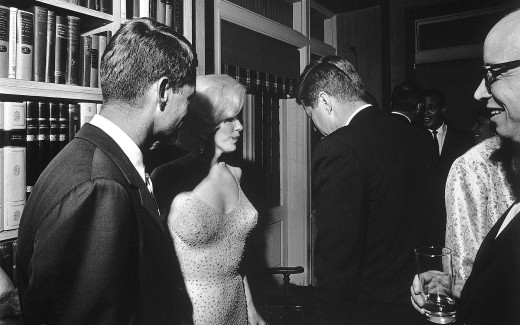