The latest safety video from Air New Zealand makes far more sense if you’re a Rugby fan. The video is shot with a Men in Black theme and features the Black’s fullback – and woeful singer – Israel Dagg

, winner of the 2009 Australian Idol. Guest appearances are made by English legend Martin Johnson, Australian Legend David Campese, and Argentina’s Agustin Pichot. The (safety?) video features a number of New Zealand players that include the team captain Richie McCaw and coach Steve Hansen.

– Agent Zed from MIB1 and MIB2 – and Frank the Pug, reprise their legendary roles and feature throughout the video.

Rip Torn was famously arrested for breaking into a bank while on a drunken stuper in 2010. Unable to return to his role in MIB3, Torn’s character was killed off.

The video was created in collaboration with Sony Pictures and Imageworks. It was released to coincide with the Rugby World Cup which kicks off in England on September 18, and to celebrate ANZ’s extended sponsorship of the All Blacks and New Zealand Rugby until 2020.

The connection between the All Blacks (the NZ Rugby Team) and Men In Black is a concept lost on most people living outside the Rugby world. Certainly, if you aren’t familiar with the sport, viewers will be confused by the proliferation of featured middle aged men in place of the bikini-clad flight attendants we’re used to seeing.

While entertaining, the video continues with the questionable trend of manufacturing viraly-worthy preflight material that contributes little to the short-term safety of passengers. 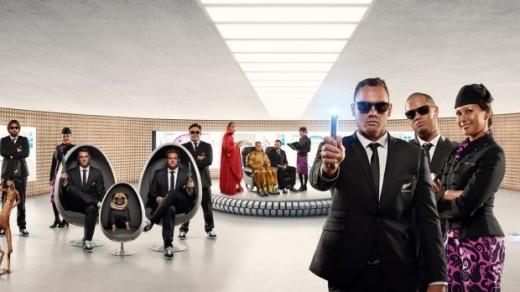 has had over 0 views.