In one of our early demonstrations of a text-to-Twitter feature, we quickly built a mechanism that would post aviation ATIS (Automatic Terminal Information Service) reports to Twitter.

). I had a quick look for a good information source and gave up almost as quickly as I started. I envisaged too much difficulty - or at least elegance - in rendering the report because of its long character length - well in excess of Twitter's permitted 140 character count. There was an existing account that did as asked but the report sent to Twitter was truncated and split into chunks that resulted in multiple and incomplete messages for each ATIS broadcast - a rather clumsy approach.

Note, 4th November 2020: In the 2020 election-bot blitz our automated account was one that was caught up with the massive array of accounts that were suspended. We're in the process of reactivating those accounts that were caught up with the indiscriminate action. Note that because of massive abuse of this API the endpoint has moved to the BM Platform and all requests now require an API Key.

After reviewing the long list of things to do, the Twitter ATIS project was one that caught our attention. For the purpose of demonstrating some basic tech that we could show clients, and to provide a genuine (non-operational) source of information, we decided to revisit the abandoned project and build the entire ATIS report into a single image that we could sent to Twitter. The result can be found on Twitter as @SydneyATIS

The above image shows the returned array of data that would be sent to Twitter if we were to send images as text. The crude result of this technique is demonstrated by another account

that has provided ATIS reports for a number of years. The user experience is rather poor.

Sending each report as an image bypasses Twitter's character count limitations and permits us to render text in its entirety without omission. The report from our account at @SydneyATIS 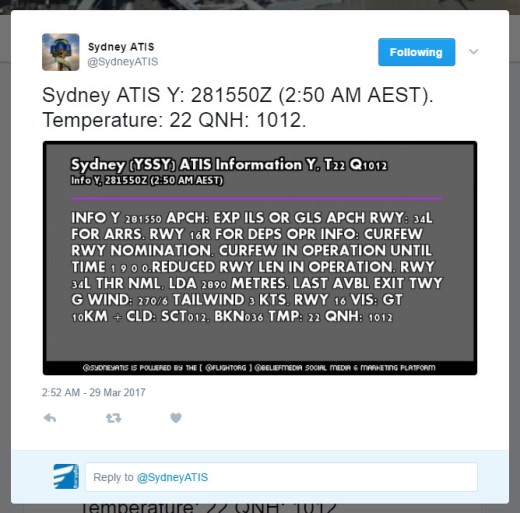 The tweet message includes the UTC and local timestamps of the time the ATIS was recorded, and we include the temperature and QNH for an easy reference.

We archive each ATIS message in a local database that we can use for reference when required (for example, various incidents when weather has to be evaluated).

How Could You Use This Feature?

While the tool we're using for our demonstration is almost certainly unlike anything you might need yourself, it's a good demonstration of how you might broadcast messages, long text, or anything else that might need to navigate Twitter's restrictive 140 character limit.

While clients may use this feature to read text from a pre-populated database, our example sources the text from elsewhere, tweets it, and then makes a record of it. There's endless opportunities to be the definitive source of information - such as stock quotes, interest rates, or other dynamic text or graphs - if this tool is used correctly.

Regardless of what sort of Twitter feature you might require, we can normally manufacture a tool you can use within one business day. For event related accounts we can have something live in less than an hour.