In the field of psychology, the Dunning"Kruger effect is a cognitive bias in which people of low ability have illusory superiority and mistakenly assess their cognitive ability as greater than it is. The cognitive bias of illusory superiority comes from the inability of low-ability (of high confidence) people to recognize their lack of ability. Without the self-awareness of metacognition, low-ability people cannot objectively evaluate their actual competence or incompetence. The psychological phenomenon of illusory superiority was identified as a form of cognitive bias in Kruger and Dunning's 1999 study "Unskilled and Unaware of It: How Difficulties in Recognizing One's Own Incompetence Lead to Inflated Self-Assessments". The identification derived from the cognitive bias evident in the criminal case of McArthur Wheeler, who robbed banks with his face covered with lemon juice, which he believed would make it invisible to the surveillance cameras. This belief was based on his misunderstanding of the chemical properties of lemon juice as an invisible ink.

Incidentally, the Dunning-Kruger effect is the same physiological phenomenon that plagues the marketing world " particularly the finance field where representation is very poor. We often describe our competition as providing a service with "lemon juice smeared over their faces" (we're talking about the charlatans that sell leads).

Those that tend to recognise their own bias live by the mantra, "the more I learn the less I know". Ironically, the more they continued to educate themselves the stupider they become.

In order to assist mortgage brokers that aren't 'top of their game', or for those that are new to the industry (they'll all suffer from DKE to an extent), SOPs are essential. We need guidance, education, and other material that serves to provide them with a step-by-step framework for task completion, but also an education component so they're more suitably tasked with making their own self-assessments. Image source: haines-lab.com (shows a popular interpretation that is a little flawed). 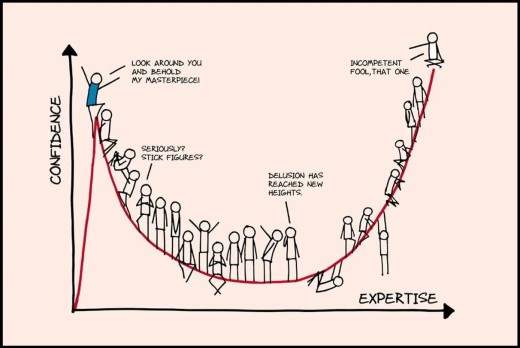 In the field of psychology, the Dunning"