The Stock and Bond Business

One of Louis H. Engel's most innovative advertisements, and one that often turns up on lists of the one hundred most influential ads in US history, appeared in the fall of 1948, approximately two years after he had joined Merrill Lynch. Titled "What Everybody Ought to Know about This Stock and Bond Business," the NYT advert consisted of 6540 words of very small print squeezed onto a full-size newspaper page (the original landing page) - the most anybody had ever used in a single page.

The copy was informational and educational, and textbook dry in tone. There were no explicit references to the firm's own brokerage services in the entire text, but at the bottom right of the page was a small calling card that identified Merrill Lynch as the sponsor and invited readers to request free reprints of the ad in pamphlet form (their Call to Action). In the history of print media, no single advertisement with so much seemingly boring copy had ever been published for any product or service.

Engel's subsequent aggressive campaigns, which were typically both educational and eye-catching, set new standards for brokerage firms and other enterprises in the financial services sector.

While the concept of a lead magnet or long-form copy was nothing new, the modern day version of the principle was essentially born with this campaign, and it dictated the manner in which long-form campaigns would follow (most notably via advertising genius David Ogilvy).

Note the option to respond to the advert in the bottom right (the "old-school" method in which to obtain contact details). The prospect would later receive an invitation to a seminar (as part of the marketing funnel) where the audience would watch a 30-minute movie in "full colour" that took them through the "How to Invest Show". After Merrill Lynch established its name they ran an advert in 1956 with a direct invite to the seminar (they'd already established widespread trust).

The advert did what very few modern ads will accomplish: it provided an education. 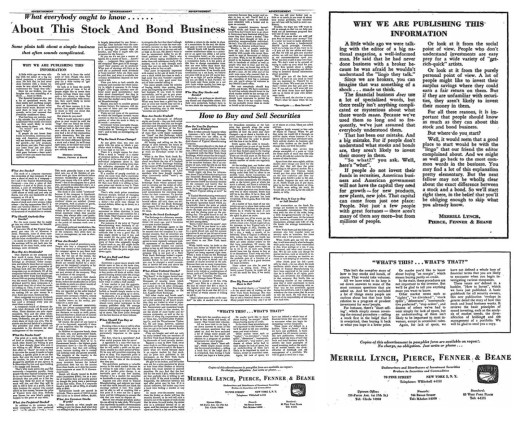 One of Louis H. Engel's most innovative