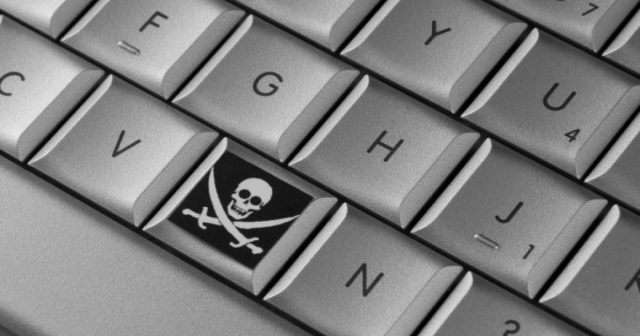 A day rarely goes by where we come across advertising originating from Australian finance or mortgage businesses on Facebook, Google, or elsewhere that doesn’t breach Australian financial advertising guidelines or legislation. The availability of digital services has paved the way for about anyone to create financial advertising that potentially opens up business owners to litigation, ASIC fines, or even the cancellation of a credit accreditation. After length discussions with key stakeholders over the last few days (following on from their talk at our Fintech Marketing Summit earlier this month), we’re learning that regulatory bodies are finally beginning to apply scrutiny to the style and messages making their way into the digital space.

This articles comes before another where we look at “Ethical and Legal Financial Advertising“, and it serves as an example to illustrate the growing trend of dodgy marketers that are engaging in lead harvesting from what are often fake, falsely represented, or unbranded finance businesses. The leads are then often given away in Facebook Groups or bundled into “Buy Now” packages (going against the grain of providing anything that resembles a valued customer experience); others will use the practice to simply supplement their poor-performing Facebook programs. There’s also a growing trend of finance businesses buying into lead generation programs with a guaranteed return per month (say, 50 leads) with the media company itself falsely representing itself online as a generic mortgage business before handing off ‘leads’ to subscribed customers. It’s not uncommon for the ‘leftovers leads’ to be given away for free in Facebook groups (the marketers that have ever posted on Facebook or elsewhere that they have “leftover leads” or or “free leads” are normally leading you into a realm of potential litigation). The dodgy lead generation methods vary but the associated marketing is almost always non-compliant. As we’ve previously discussed, these nefarious practices are often supplemented by illegal offshore telemarketing.

The truth is that we don’t know if the campaign as discussed on this page is in any way connected to a legitimate business or not (and this is part of the problem). What we do know with certainty is the manner of advertising is illegal. After a number of calls to the media company responsible for the website described below we were told via email that we would need a court-issued subpoena (yes, a subpoena) in order to receive the name of the finance business behind the advertising. To state the obvious, their behaviour doesn’t seem to be consistent with the test of reasonableness. 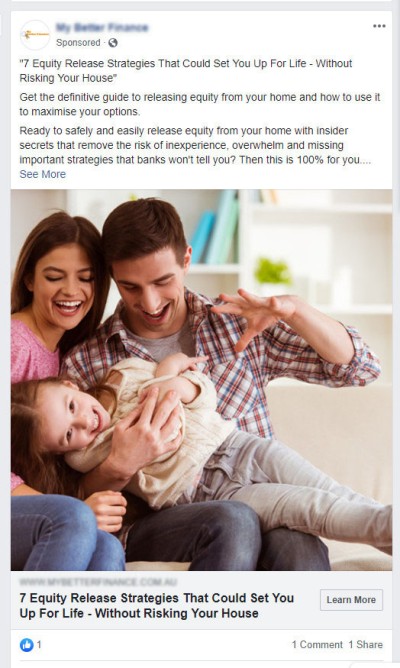 Apart from the long-form advert coming across as being written by a third grader, the image used was the the very first result returned via a Google Image search. Not a great start (it’s not hard to use a royalty free image

if you’re not going to invest anything into your creative).

The unverified Facebook Page associated with the business has just one ‘like’ and has existed for less than a couple of months. The business name associated with the page doesn’t exist in any ASIC database and isn’t returned via any other search – not an indication of illicit behaviour in isolation, but there were no hints whatsoever as to the identify of the offending business anywhere online.

I figured I’d learn more via their landing page. 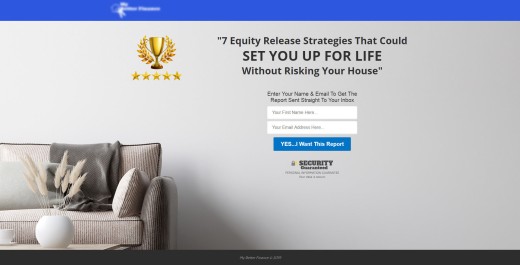 A few minutes later I was served the same advert that led me to a similarly deceiving page. 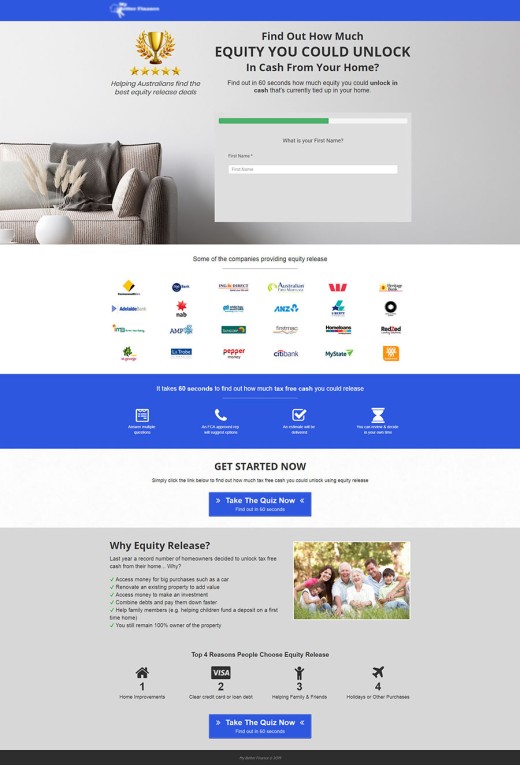 First, it should be noted that the ‘Quiz’ is not a quiz that’ll return information as promised; it’s basically a form asking for name, email, and phone number, and it doesn’t follow up with an email as expected or implied. The Facebook advert headline and copy provides the impression I’ll receive a “definitive guide” relating to “7 Equity Release Strategies That Could Set You Up For Life – Without Risking Your House” – itself a false statement if the product served is in fact simply refinancing – yet no email was received (we had two other independent people engage in the process to determine it the lack of any guide was a result of spam issues).

There is a second form that’ll ask a long series of questions relating to property value, personal income, current mortgage status, and loan purpose, but it simply advises that a representative will call (without giving any indication of who that representative will be) and doesn’t return the promised lead magnet.

Pictured: The 60-second quiz makes the promise of results when nothing is returned. An approved ‘FCA Consultant’ will get back to you within one business day (possibly from a blocked number). While it may be legitimate, it sounds nothing short of dodgy.

The notion that one can find out their “tax free” equity-based borrowing capability in “60 seconds” as described (and as implied by the page title, “Equity Release Estimate”) is patently false. The assumption is that personal details squeezed via these pages are simply provided as leads to a single ‘rotating’ business or fed into a collective (I find it difficult to believe that the campaign is associated with a single business when no there’s no indication whatsoever of any branded stakeholder). If details are in fact passed onto a real business, they need to seriously rethink their marketing strategy. 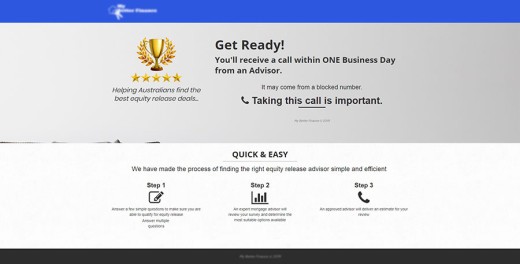 The thankyou page makes mention of the ‘survey’ and indicates that the call from ‘an adviser’ may come from a blocked number – another mechanism that is seemingly used to deidentify the business.

The problem with the landing pages? The business seemingly doesn’t exist, there’s no contact information of any kind on any page, there’s no ACN, CBN, ACL, or other licencing details, and there’s no privacy policy (also in breach of Facebook’s own landing page requirements). There’s no indication whatsoever that this business is in any way accredited, licenced, or approved to promote financial products. In line with financial advertising guidelines there’s also no general disclosure of the product on offer or whether the product is in any way something the visitor should consider – it’s purely email-based lead generation.

There’s text on the landing page that says “[a]n FCA approved rep will suggest options”. Thinking that the ads might have been provided to a misguided business, I first contacted FCA Financial who advised they don’t deal with home loans – yet expressed concern over the language used on the page. I then contacted Financial Counselling Australia

who were equally as concerned – particularly since they fight for fair conduct in the finance space. Could the author have confused the UK’s Financial Conduct Authority with a local authority?

The domain name is registered to yet another Brisbane-based marketing agency (we’ve found serious non-compliance with a few marketers in QLD, all of which claim a specialty in the field of broking – including this one). I made five phone calls to the agency but they declined to return my calls (today their shared reception very rudely telling me to simply send an email). One can only assume that they’re running their own lead generation program without regard to relevant legislation. Even if the landing pages were attached to a legitimate business the entire experience still doesn’t come close to complying with Australian legislation or even Facebook’s own advertising guidelines.

that includes an extract from A Current Affair. I have confirmed that the family profiled in the story have no knowledge of the mortgage or media company.

The practice wouldn’t bother me so much if the example I’ve provided was an isolated one. Sadly, we see similarly deceiving adverts every single day with ‘media agencies’ using generic catch-all pages to illegally funnel consumers into a sales process. However, there are just as many legitimate brokers that are often in breach of very clear guidelines or legislation that dictates the overarching responsibilities when creating financial advertising. In many cases, a broker invests faith into their marketing representation assuming that guidelines will be adhered to – but this is often not the case. Brokers, despite their outsourcing, will often suffer the legal and financial consequences if ASIC decides to take action; the broker usually inherits ASIC’s wrath because they ultimately had the opportunity to intervene and course correct. All advertising and promotional material should always be proofed and approved for this reason – both for ass-covering on the marketing end and to ensure another set of eyes looks for non-compliance (s1044A, Corporations Act; s12GI(4), ASIC Act). If you’re one of those brokers that doesn’t know what your advertising looks like, or you’ve opted into a program where you lack direct oversight, you’re potentially compromising on your business’ future.

Note (1st July): I received an email from the company associated with the campaign this afternoon where a representative stated the website in question is linked to a finance company, yet they’ve indicated that I’d need a “a court-ordered subpoena in order to obtain this information” (a company name was really the only information I had asked for). Imagine calling a ‘finance’ company to find out who they were and being told that you required a subpoena before they’d tell you – this is exactly what happened to me. Of course, any financial institution that partakes in marketing is legally obliged to disclose exactly who they are, and identifying information must also be disclosed on the website where any marketing material is served. The email response goes on to say that “[t]here has been no illegal activity and no unwarranted claims made on any marketing material…” – admission that they have no understanding whatsoever of their legal obligation when promoting financial services. Despite my very polite phone calls to the business concerned (prior to my email) they’ve indicated that if I try to make contact again they’ll refer details to the police (as a former police officer I’m not sure what the crime is, or why a request for basic information required by law would be met with such ridiculous threats). They included the obligatory threat of legal action which I absolutely welcome; any legal action they might choose to take will only serve to make an example of their very obvious and costly infractions.

It’s only after the offending company failed to provide a company name that I spoke to a representative from ASIC where it was quickly determined that the online experience was unquestionably and objectively in breach of legislation (even if the finance company did exist). As a result of that discussion we sent ASIC all the relevant material we collected – including numerous screenshots and correspondence.

Our objective by calling out these charlatans isn’t to name or shame any company but rather educate brokers on the nature of poor representation in the industry. Paying thousands to a marketing company shouldn’t end up costing thousands in fines. We go to great lengths to create high-performing compliant campaigns and we get a little frustrated when “marketers” introduce blatant non-compliance and the potential for financial penalties to a business. The dodgy practices in the financial marketplace have to come to an end.

This article is followed by another where we share details on what is legally required to represent your finance business online, and what style of advertising might attract ASIC penalties.

Note that a general article on post-Commission financial responsibilities – referencing the example noted on this page – may make its way into broader syndicated newspaper content.