A couple of years ago we shared the first version of simple Omny Studio WordPress shortcode that would return a stylised Omny player to your website. At that time we were investigating what audio hosting services we'd use ourselves, and what service Yabber

would support by default. Since then we've landed on Omny as a default service that we'd recommend to our clients, and we're a few weeks away from including an Omny module within Yabber.

Yabber Integration: Other than basic features described in this article, Yabber will record full and complete Omny statistical data, and fully integrate with other modules, including a unique 'audio' feature within Instagratify, and perhaps even a dedicated audio archive on your website - not unlike the archive we create for Instagram posts and your videos.

This article introduces the drag-and-drop Omny Elementor block made available from within our default client website plugin. Inclusion of an audio player is fully customisable, and we navigate the requirement to include messy embed code by way of a menu that returns all your registered audio programs (as ingested by Yabber).

The article introducing the Omny shortcode function should be referenced for a more detailed look at the various player formats (all of which the Elementor block supports).

The audio above was recorded as a test simply so we were able to better evaluate the Omny platform, so it'll likely be recorded again with a little more 'focus'.

The Elementor block returns a fully formatted Omny audio player to your post or page. The block is made available from within the standard 'BeliefMedia' Elementor block options.

Pictured: The Omny Elementor block. Drag the block into your page and you will be shown the various player options.

Once the block is on your page you should select your preferred audio program (segregated by program 'channels') and apply the appropriate options.

Pictured: The default Omny presentation options are shown, but you may also define your own custom player dimensions.

By default the player will inherit the default style as applied in Omny but you may alter the stylistic appearance of each player individually by way of the 'Player Style' option. 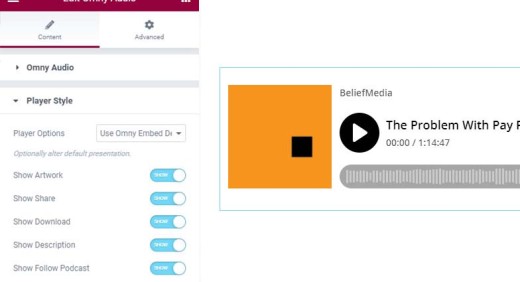 Pictured: Presentation options that may be customised on the player level includes artwork, sharing, download, description, and follow button options. These options should normally be set globally and then only altered when required.

Once your options are applied you simply save or publish as required.

Audio in the Funnel

A little outside the scope of this article but worthy of mention nonetheless. We introduced a program around 2014 where we'd introduce audio snippets and full interviews to a library that could be used by brokers in their own audio material. Sadly, that program ceased in 2017 simply because very few brokers took advantage of the product. Since that time the industry has woken a little and better understands the value of an immersive marketing funnel journey that includes podcasts, audio, video, and other dynamic content. With a better business understanding of what it takes to create higher-yield marketing process, and with a far better understanding of what's required to succeed with SEO, we're now considering reintroducing the audio program back into the mix.

We have a large number of Omny features in development that Yabber will support. While a lesser-'important' tool in the general marketing efforts of most brokers, we encourage businesses to engage with audio in one respect or another, and the Omny block makes distribution a piece of cake (we include your audio in our account until you see the value in your own subscription).

It should be noted that Wistia supports podcast hosting and arguably provides a better marketing experience by means of identifying user interactions, and by way of their webhooks (supported by Yabber), but it's a service that doesn't quite provide the same scope of audio features when compared to Omny, and it comes with a much higher subscription fee.

Featured Image: Two men spinning records at 2GZ, Sydney, 23rd July 1937. Station 2GZ, commenced operations on Thursday, October 31st, 1935 in Central NSW with a powerful transmitter situated at Amaroo, twelve miles from Orange. 2GZ rapidly became one of the most important and popular radio stations in the Commonwealth, and in November 1936, they relocated their main studios and offices to Spring Street, Sydney, with the Country Studios and sales department remaining in Orange. in March, 1937, after rapid growth, the 2GZ started broadcasting from its studios at Hosking House, Hosking Place, Sydney. The 'floating' studio (a building within a building) included three studios, two producers' booths, an audition room, and a control room, comprising a complete and fully equipped unit capable of under taking all types of radio work. While entertainment was the predominating feature of 2GZ’s program, the needs of the farming community weren't ignored. The station presented a comprehensive regular schedule of market and weather reports in addition to informative session, with some of the State’s leading agricultural authorities come to the microphone to assist in keeping listeners abreast of the latest developments in scientific farming. As part of 2GZ’s efforts to assist the farming community, they introduced a "Progressive Farmer" competition (supported by Rural Bank and the Agricultural Bureau of N.S.W), the winner of which was sent on an extended tour of the United States to comparing Australian and American farming methods. 2GZ is now Orange-based, and known as 'Triple M Central West'. Photo comes from Sam Hood

when the station was located in Sydney. [ View Image ]