, or ASA) has banned yet another Ryanair advertising campaign. The print advertisement features a bikini clad model promoting “sunny” destinations – despite average spring temperatures ranging between only 6 and 10 degrees Celsius.

Normally, I’d struggle to determine if this was a deliberate attempt to elicit a response from media, but if history has proven anything, it’s that Ryanair don’t do anything unless there’s a controversial element that’ll give the airline global media coverage. They’ll constantly pursue any unfair course of unethical advertising if it manages to generate a little publicity.

and quickly adjudicated by the ASA. The first complaint related to legitimacy of the advertised price; the second related to the bikini clad model in what would be a cold climate at the time of the available booking. 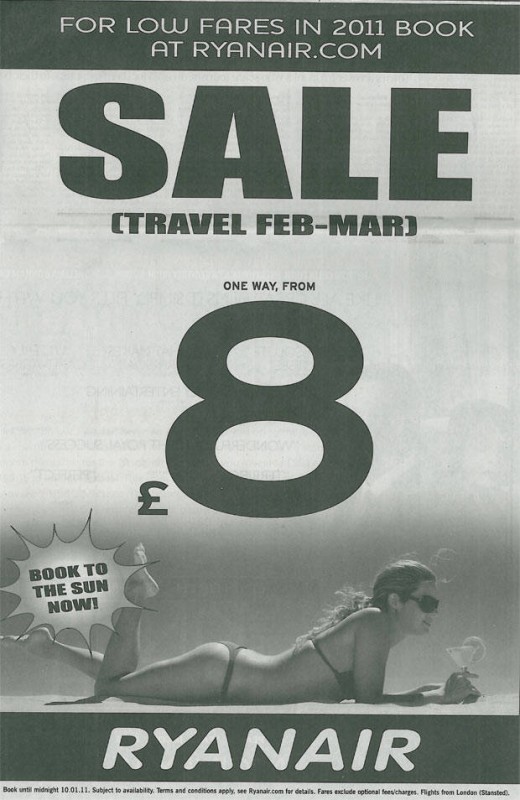 Ryanair Book to the sun advert.

Ryanair responded to the second complaint by pointing out that “…the ad stated ‘Book to the sun now‘” (and, presumably, not “Book to warmer weather”). They said the promotion included a range of destinations, including some that had significant daytime sunshine during February and March.

Sure, it’s misleading… but since when has advertising given us anything other than a stretch of the truth? Does a “Mars a day” really help us work, rest and play? Does a Picnic really satisfy? I saw a Toyota TV advertisement recently where the vehicle launched itself into outer space. If I purchase one with the intent of space exploration, does that qualify me for a refund if it doesn’t work? I guess false advertising only qualifies when we’re not clever enough to determine what’s real.