This post was initially shared on Internoetics in 2007 and includes only minor modifications to the original. In a sense, our experience as described below will provide you with some historical context on the evolution of Belief Media. We made a lot of mistakes early on, and our Usenet experience provided its fair share of stuff-ups.

Ask your average Internet user what Usenet is and they likely wouldn't have a clue. For many, Usenet is the Internet. The modern Usenet structure pre-dates the Internet with its rise to popular geek culture about 1979 when Tom Truscott and Jim Ellis designed the modern architecture that provides the basis for the medium that is employed even today. In its simplest form, Usenet is a worldwide, unmoderated discussion medium with over 100,000 forums, or newsgroups, encompassing virtually every topic known to man. Usenet has no owner or central server and is arguably the most expressive form of unmoderated communication on the Internet.

Usenet is distributed among a large, constantly changing conglomeration of servers which store and forward messages to one another. These servers are loosely connected in a variable mesh. Messages spread like wildfire from one server to another before they propagate worldwide to a global audience. It's an old (and arguably inefficient) way of transferring messages, but the speed of networks now makes it very bearable. In the early days of Usenet, messages didn't appear in newsgroups for over 12 or even 24 hours, but now it will generally only be seconds before your message is propagated to and archived on Usenet services worldwide.

Individual users usually read from and post messages to a local Usenet server operated by, say, their ISP or university, but for some, prohibitive ISP-level restrictions often apply and prevent trouble-free access to the service. One barrier to Usenet is that the traditional port setting for Usenet access, 119, is often blocked by firewalls and system administrators, meaning that Usenet access has to be sourced from a server that permits connections on port 80. If the user does have Usenet server access, sometimes just configuring the cryptic newsreader client software required to access and read Usenet is just more trouble than it's worth... meaning that a potential Usenet candidate might steer themselves in the direction of moderated web based forums instead. Others don't even know that Usenet exists.

Our platform as described below navigated the multiple barriers to newsgroup entry and opened up a simple and free Usenet experience for everybody.

The idea for Usenet.com.au was inspired by the single aus.aviation Usenet newsgroup in mid-2007. It was identified that the group was simply lacking in the traffic that its daily readership and (general) quality of discussions deserved. Personally, I felt that making the group more accessible would attract actual pilots into the mix and compensate for the disproportional number of pseudo-intellectual enthusiasts and prats that tended to be over-represented.

We snapped up Usenet.com.au after the previous owner let their registration lapse - for reasons that has confused us for years (at the time it was established generic domain with ridiculously large amounts of traffic). We quickly built the website with three primary modules:

Note: Usenet.com.au is available now to clients and partners. However, there's still a lot of work to do that will lift its general design standard.

At the time our original Internoetics article was published (December 6th, 2007), the website had managed to excel in an area that was barely in its infancy: SEO. We had top rankings with Google for generic terms such as usenet, aus.aviation, and so forth (not so much now, of course). We unexpectedly attracted massive amounts of traffic by virtue of no other competing platforms and a clear need for our product. Our single biggest mistake was releasing Usenet without an understanding of how popular the site would become. Underneath each message posted was the footer "Posted from Usenet.com.au", and this was enough to drive large amounts of traffic from the first day the site was live. 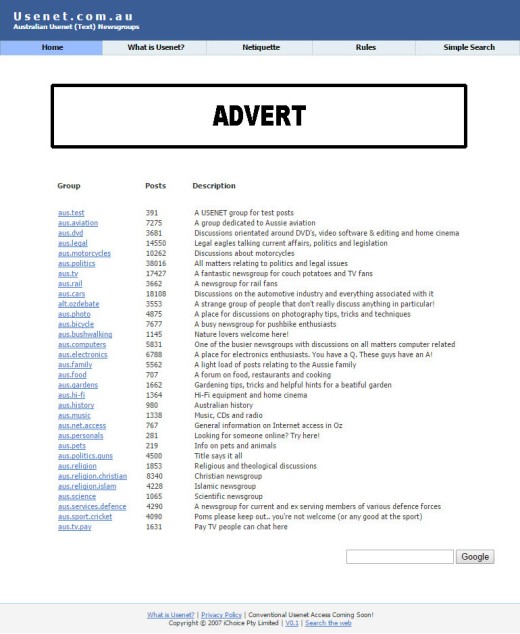 As a measure against abuse we implemented strict registration guidelines. Early attempts at having faith in the Internet failed miserably... this was our second mistake. Spammers will always find a way. However, forced registration did mean that a user had an interaction dashboard with additional features... essentially compensating for the need for a verified sign-up. 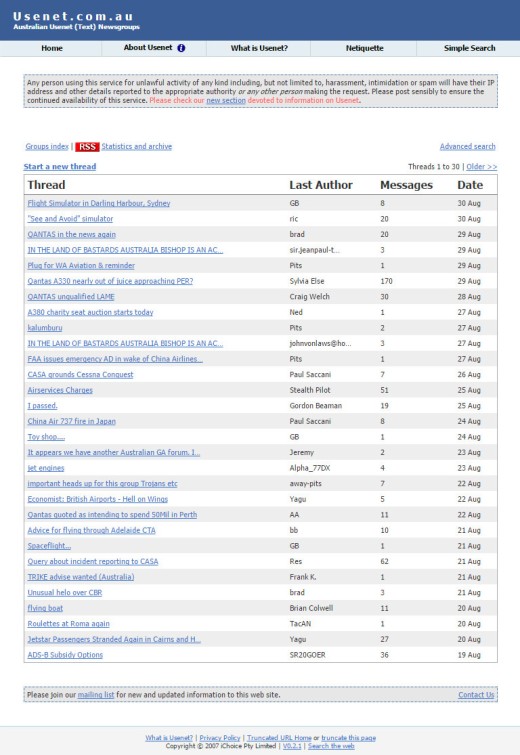 Google Adsense and other 'pay-per-click' revenue was almost always the motivation behind websites we built while 'learning the ropes'. Certainly, from a web publisher point-of-view, free web sites aren't entirely "free" to the end-user since Google ads generate ongoing commissions for the developer long after the web designer hangs up their text editor. We tried hard to find a balance between the maximum click rate (to maximize earnings), but at the same time ensuring that the ads didn't interfere with the pleasure of actually using the service (something many modern publishers seemingly ignore). Monetizing the site attracted ongoing criticism because many believed it was contrary to the free spirit of Usenet. 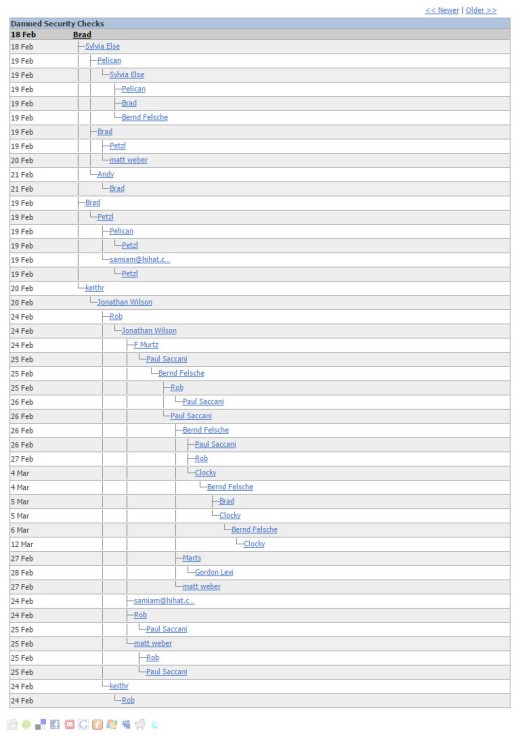 At the time of initially writing this article, the website received over 120,000 page views a week, and it was growing substantially every day, so we were pressured to constantly enhance and build upon the very basic design and service to ensure we remained competitive with other such providers (we didn't, of course... another failure). In setting up the site, it was always our intention to build something more aesthetically pleasing than the initial website. The first (and final) version of the site was literally deployed in about 3 days, and the quality of the site reflected our efforts.

This article was lifted from our old techy site at Internoetics and dropped here with only minor modifications. A few months after this article was originally written, I left my life commuting between Sydney and Canberra flying corporate aircraft and started with Virgin Australia International. Because the Boeing 777 International operation was a startup, I was tasked to build and manage a Learning Management System which essentially put an end to significant online developments... which is a shame. At the moment we've preserved the front-end behind closed doors, meaning the main method of access is via a dedicated Usenet client.

Despite the lack of time, we did make a few site modifications in early 2008. Whenever images appeared we rendered thumbnails under each post, we automatically truncated posted URLs (visible in the user's fat.ly dashboard), we conducted malware checks on links, and we rendered YouTube videos inline with articles. Basically, we converted any external link into 'something', meaning that the user didn't have to vacate a newsgroup article for linked content. Despite the enhanced user experience of web based access, we did attract some negative feedback from those that saw the often limiting barriers to using Usenet as a means of keeping out larger audiences. The prehistoric Usenet regulars enjoyed their sense of ownership and started to feel a little out of place when there was a growing number of voices that actually represented industry.

With the popularisation of social media, mobile applications, and other web-based tools, Usenet began a slow decline in visitation. We had to shut down our service on the 10th of April 2013 as a result of ongoing abuse, and it wasn't long before most major Aussie ISP's incrementally did the same (for example, Telsta shut down access on the 16th April 2013). Some Usenet newsgroups, once very alive and active, are now completely dead.

After we shut down the service, we did revisit the platform briefly in July of 2012. Since social media was essentially driving Usenet's slow death, we figured that integrating the platform heavily with social media might be a means of giving the newsgroup service renewed life. We created multiple social accounts on various platforms and initially intended to share new discussions, statistics, and other data with the real world to give Usenet renewed legitimacy. Of course, the pressures of other tasks soon put an end to these plans.

We do plan on doing something with our old service... although the nature of the project is still largely unknown. Whatever we do, there will clearly be a modern focus on social integration, and the platform will be manufactured so it's of benefit to those businesses we work with now.