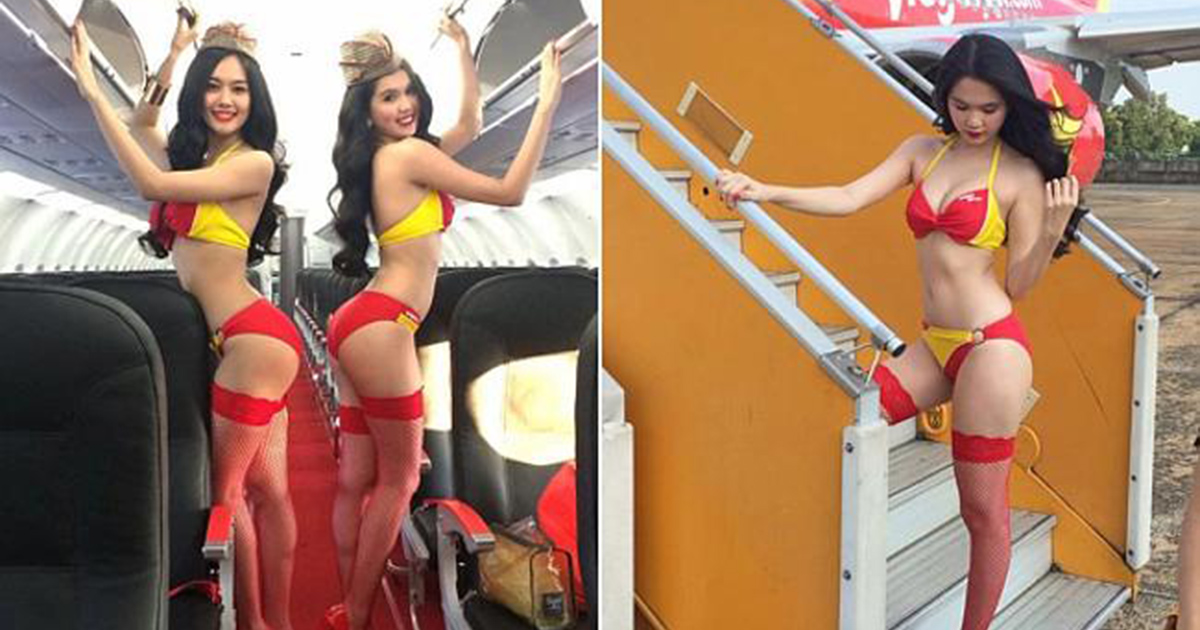 have attracted serious criticism after photographs of flight attendants dressed in livery-inspired lingerie ‘leaked’ their way onto the Internet. The sexualisation of aviation is nothing new. We’ve talked about the practice countless times before (and this won’t be the last).

The topic of the sexualisation of aviation is one that we’ve long talked about because, first and foremost, it can potentially impact upon the safe working environment of those in the aircraft – particularly younger girls. It’s hard to criticise the flirtatious and often invasive attitude of guests when the airline you’re working for provides marketing that seems to support the notion that the girls are mile-high strippers.

In the wake of our feature on the Mile High Club feature a little while back we’ve seen a large number of high profile bloggers and news outlets cannibalize the article for their own cabin sexualisation (and sexual harassment) related rants. Read our article here.

The calendars, sexualisation and bikini-clad marketing does often has a place, but juggling the subjective perception of what might be seen as offensive is a challenge most airlines seemingly like to violate. The Internet has provided the ultimate platform for cost-effective viral marketing and, sadly, it doesn’t take much more than a few pretty girls in bikinis hanging off an aircraft to garnish the attention of the entire world. As long as people like us keep writing about it, and you keep reading it, the airlines will continue to do it.

The nature of how (or at least why) the leaked photographs came to be public is a little bit of a mystery. Ngoc Trinh, a Vietnamese lingerie model, posted pictures of herself, other models, and company flight attendants on her Facebook page

with the caption, “Just finished shooting promo photos for VietJet Air for 12 hours nonstop from 9:00 am to 9:00 pm.” The offending post and pictures were later deleted but not before the Internet took ownership of them. 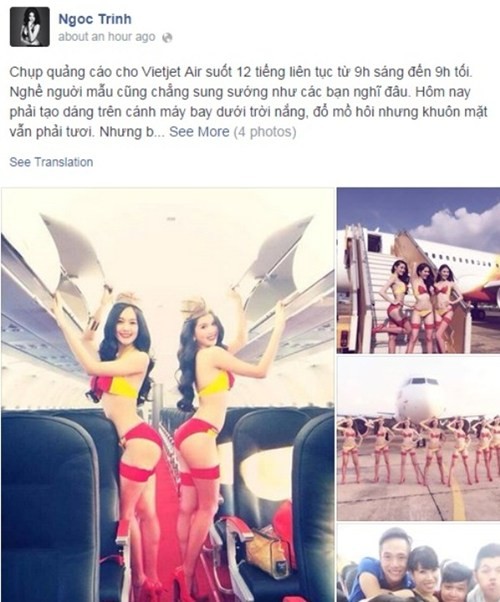 The comments to the post were a little less than flattering. The negativity was a little surprising given her page is littered with lingerie images. One would assume that those that follow Ngoc on Facebook aren’t doing so because of her inspiring opinions on politics.

are a low cost airline in Vietnam. Launched in December 2011, it’s the second private airline to operate in Vietnam. While currently operating with only 16 A320 aircraft, they have an additional 102 aircraft on order to cope with serious growth forecast for the region.

VietJet’s development and marketing director, Vu Pham Nguyen Tung, has said that the images were taken as part of a “marketing trial” and it wasn’t known if the images would be used or not in any campaign. Many have claimed that the leak was intentional to showcase the emerging brand to the world, although Tung has denied this.

The quality and composition of the images suggest that the photographer had a smartphone and no clue what they were doing.

Intentional or not, VietJet has attracted the attention of the world in a way in which money can’t buy.

Fined for an Inflight Beauty Pageant

VietJet was fined an overwhelming $1000 last month by the Vietnam regulator for organising a Hawaiian-themed dance and beauty pageant to celebrate its maiden flight between Ho Chi Minh City and the tourist hub of Nha Trang.

VietJet has no right to be defensive about the leaked bikini photographs since it’s not the first time they’ve ventured into the world of mile-high bikini-clad debauchery. The following video is from May 25th (viewed 1,894,425 times on YouTube). 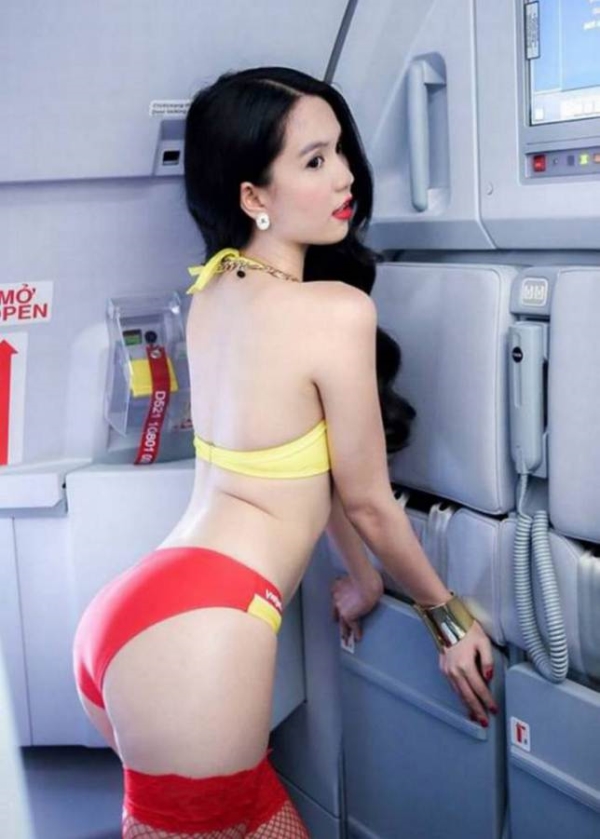 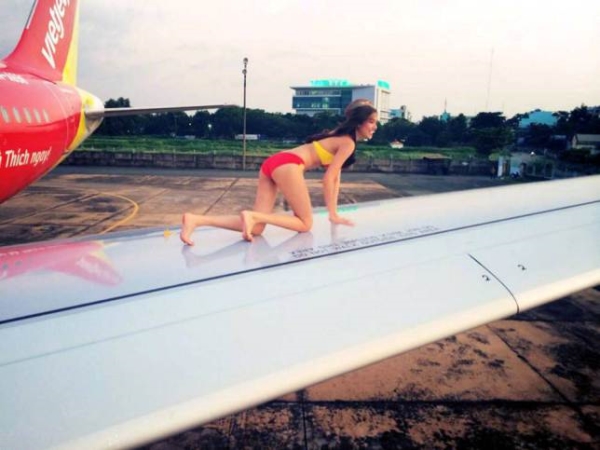 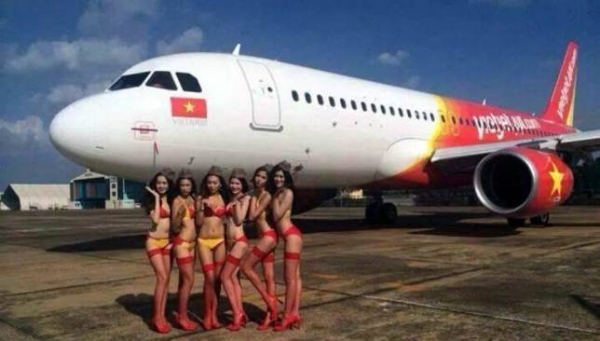 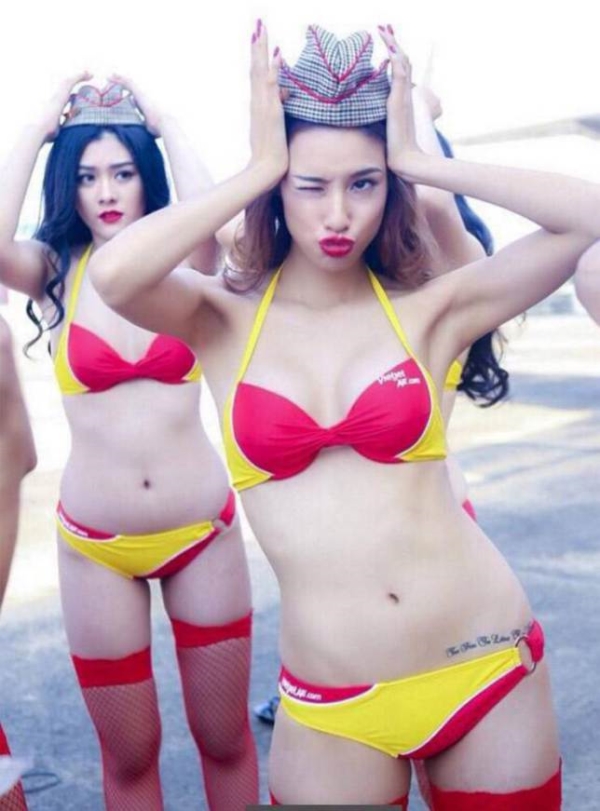 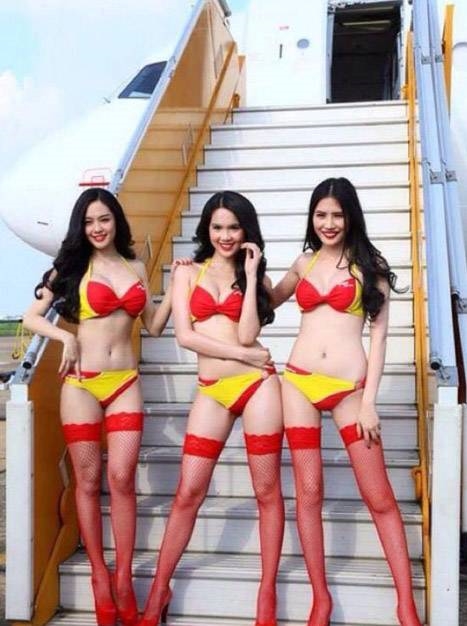 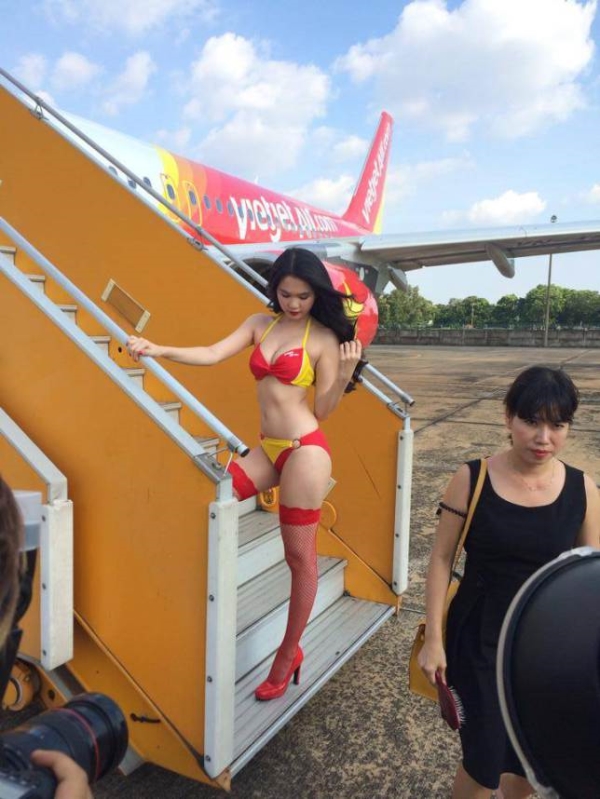 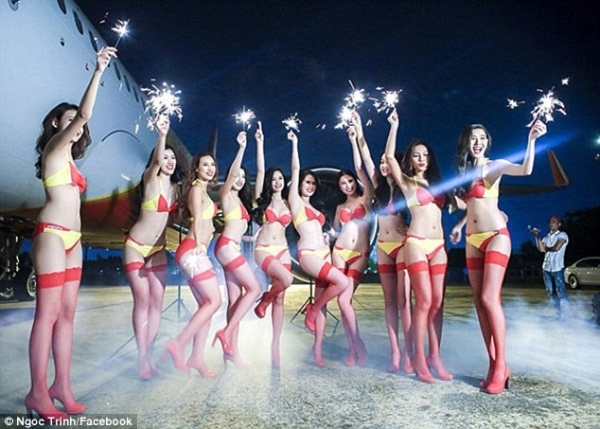 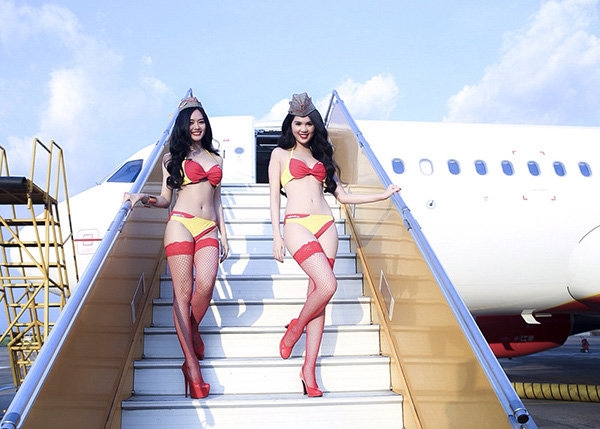 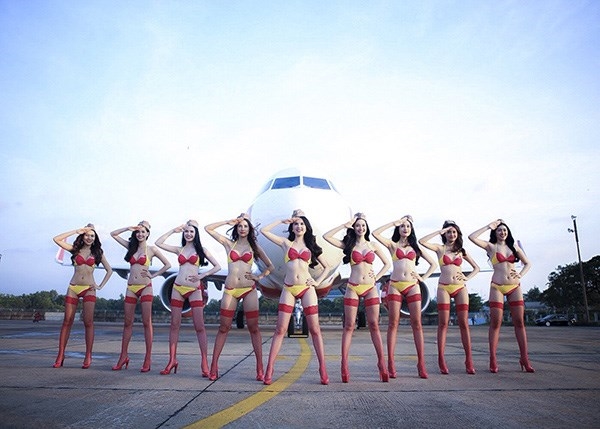 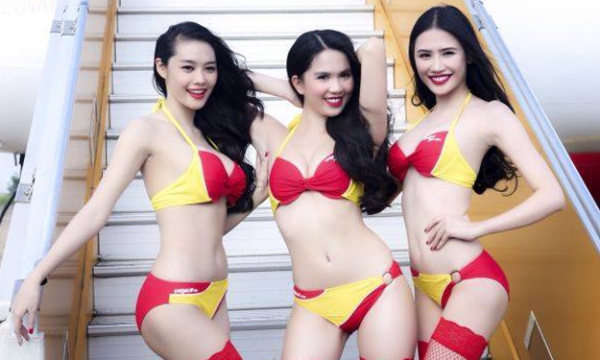 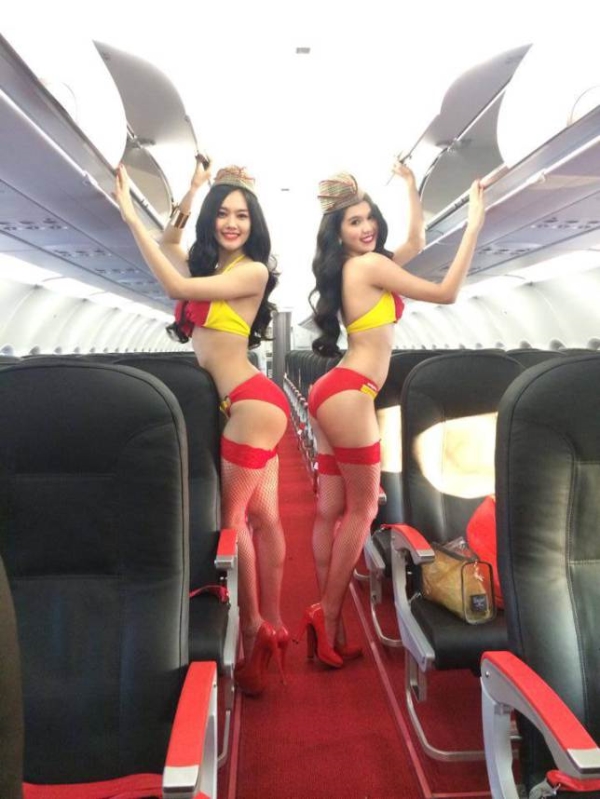 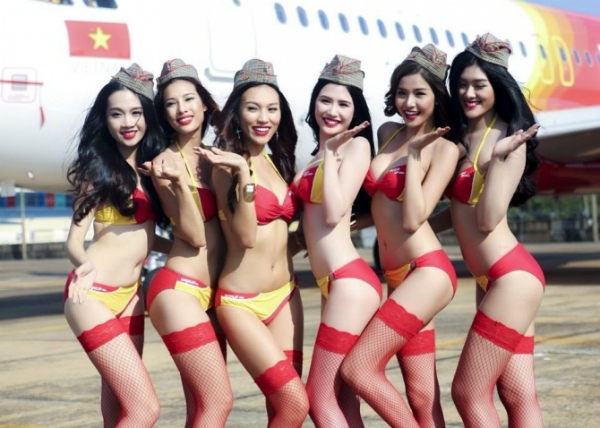 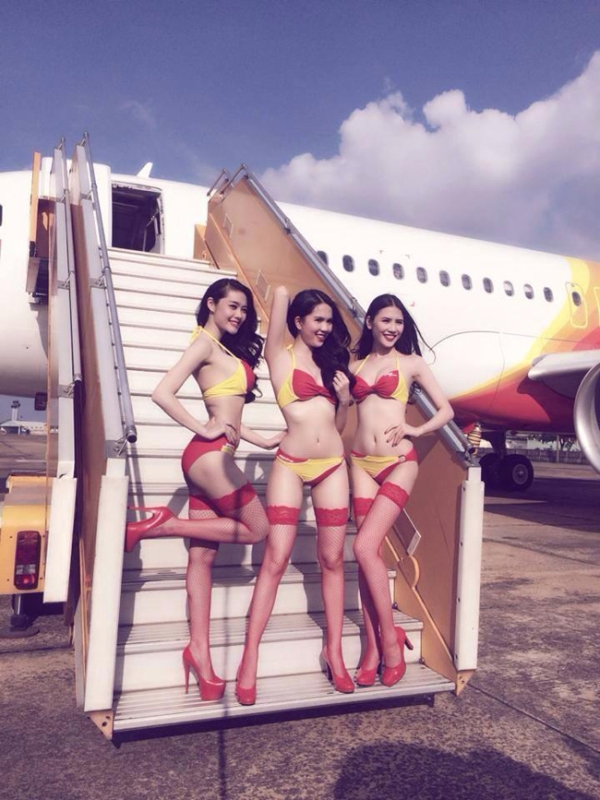 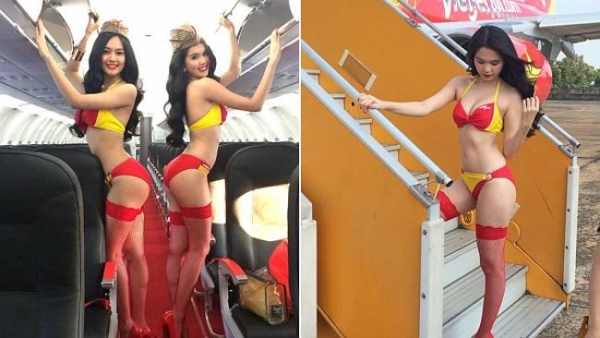 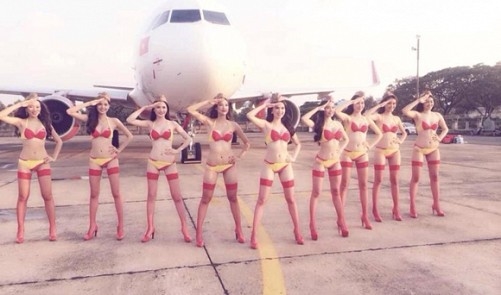