V Australia launch their new "Flygirl" campaign tonight on Australian television, marking the commencement of their first major brand and product marketing campaign. The style of campaign was already a success in the USA when it was launched on billboards across California. The campaign moves away from the reasonably successful 'Hamish and Andy' advertisements that were used for the purpose of initial brand awareness.

The 45-second advertisement features 25-year-old former US MTV host Lyndsey Rodrigues and a host of V Australia cabin crew, with a cameo appearance by Richard Branson, appearing for the first time in an advert for the Australian Virgin brand. 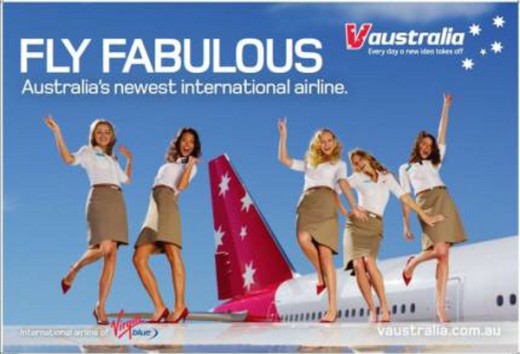 Pictured: A postcard similar to the billboards seen across the USA

Lyndsey Rodrigues is represented by (Sean Anderson's) Sydney based 22 Management

. Rodrigues is reportedly being paid a six figure sum for her part in a long running campaign, but she is also somebody that should aptly and ably represent the Australia-USA relationship and V Australia brand by virtue of her role in the New York-based MTV show Total Request Live and her Australian celebrity status from her hosting roles for both "What's Good for You" as well as "Worlds Funniest Home Videos". Richard Branson was initially interested in signing Australian model Miranda Kerr for the face of the airline but one of her main sponsors, David Jones, stepped in and put an end to the proposed deal.

The first part of the commercial was shot inside V Australia's first Boeing 777-300ER (VH-VOZ, "Didgereeblue") in Sydney shortly after its arrival into Sydney and prior to the airline's inaugural commercial flight on the 27th of February. It was shot in two parts to cater for Richard Branson who, at the time, was taking part in his 'around the world in 8 days

' voyage on board Virgin brand airlines.

The television commercial features Rodrigues board the business class service of the aircraft receiving somewhat of a royal welcome by the V Australia 'flygirls' that are dancing and carrying on to Micky Green's "Oh!" in a manner you're very unlikely to see on board the actual aircraft. Without knowing the actual message that Virgin is trying to portray, it's likely that the company is simply making the exaggerated statement that the airline experience should be one that forms part of your journey's positive experience; it should be fun.

V Australia's launch route from Sydney to Los Angeles across the Pacific has been dominated by the duopoly of Qantas and United for a number of years and both carriers have been hugely successful in de-romanticising the experience and turning the trip into nothing more than an expensive bus ride.

The nature of the advert is likely to attract a little adverse attention with the typical - and perhaps, justified - cries of sexism. Those that are used to Branson's edgy brand or behaviour won't be disappointed. For those that prefer a male theme, I'm reliably told that a 'flyboys' version of the commercial is forthcoming (our guess: it'll never happen).

Australians can see the advertisement on Sunday night during screenings of The Force, Bones, Border Security, AFL and Sunday Night. Screening times in the USA are unknown. Alternatively, you can watch the clip below.

This second video was added to YouTube about a week ago and shows a little more footage and behind the scenes filming of the Flygirls.