Special photograph no. 1303. When this photograph was taken Alfred Fitch was a car thief. He appears later in the 1933 NSW Criminal Register, cited as associating with the leading lights of the Darlinghurst criminal milieu, including KateLeigh, Harold Tarlington and 'Chow' Hayes. His entry concludes:

8. ... may be described as an unscrupulous criminal, who will lend his hand to any unlawful undertaking, irrespective of its nature, and invariably assaults, or endeavours to assault, police effecting his arrest.

9. Addicted to drink, a constant companion of prostitutes, frequents houses of ill-fame, wine bars and hotels in the city and its immediate surroundings, generally Surry Hills and Darlinghurst particularly. 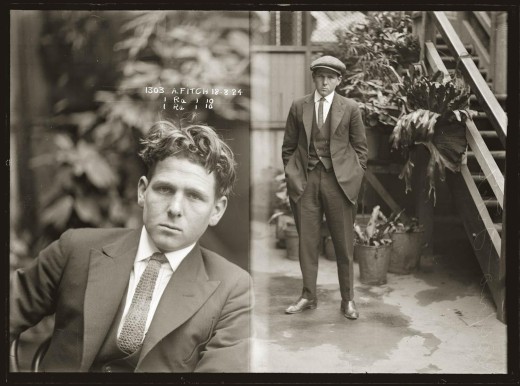 Special photograph no. 1303. When this p