Special Photograph no. 789. Alfred John West is referred in the 1924 Photo Supplement to the NSW Police Gazette as a pickpocket. His nickname, 'Eurythmic' (an allusion to Rudolf Steiner's therapeutic system of movement performed to verseor music, or in its broader usage, the graceful combining of music and movement), hints at a high order of larcenous expertise. West is mentioned again ten years later in the NSW Criminal Register, now listed as a 'pickpocket and spieler'. His crooked progressthrough NSW is traced with an almost novelistic attention to detail:

'2. At Orange, whilst brushing dust from the clothes of another man in a hotel bar stole 4 pounds from the latter's pocket.

3. Visited Bourke to attend the races there but being recognised as an urger was removed from the course. He was kept under observation however and was caught in the act of attempting to rob a man, being then accompanied by Phillip Noonan,alias Allan Noonan, alias Peter Newman, a spieler operating in the country.

4. Was in the public bar of the Hampton Court Hotel in Darlinghurst where he invited a stranger to have a drink. The man refused but offender, making some reference to the other man's weight lifted him from the ground by placing his handsbetween the victim's legs; lowering him to the floor, he said, 'You are not as heavy as I thought you were'. During these proceedings he had extracted a wallet containing 5 pounds from the other's pocket and handed it to a confederate standing nearby.

5. Is said to carry loaded dice, with which he starts a game with confederates, and enticing bystanders into the game, systematically cheats them ...

7. Somewhat addicted to drink, of good appearance, usually well dressed, a typical magsman, and endeavours to mix with persons of social standing.' 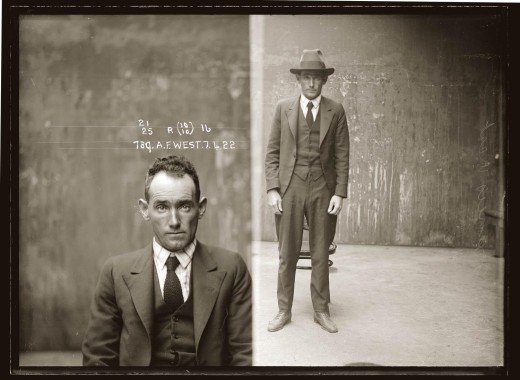