Chieftain Flying School stood on the corner of Henry Lawson Drive and Milperra Road at Sydney’s Bankstown Airport.Doug Fawcett, the owner of the facility, and former Chief Engineer of Buter Air Transport at Mascot, started Fawcett Aviation in 1947 and initially operated out of Camden. He later migrated to Bankstown Airport’s Hangar 276 in October1949. Illawarra Flying School was his first school, opening in 1950, and then added Chieftain Aviation to the mix in 1964.

Chieftain may be known to many in the area because of the Sabre aircraft on stilts out the front, or perhaps because it was the lounge area for the ‘Bond’ Goodyear blimp. It was also used for interior flying school shots for the movie “NeverTell Me Never” which tells the story of Janine Shepherd (played by Claudia Karvan).

Because of Fawcett’s background the operation always had an interesting mix of aircraft, of which two were P41 Mustangs. Pictured is VH-BOY, a Commonwealth CA-17 Mustang 20 (P-51D, CA17-1364, photo taken 3 August 1973). Sadly, its sisterVH-BOZ – privately owned but operated by Chieftain - perished in a prang in 1973. BOY is now in the USA and carries the N551D marking. 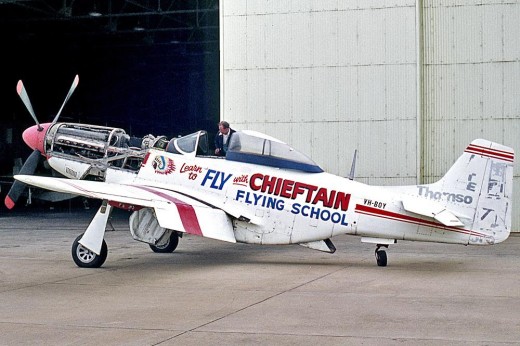