Hill End's streets were said to be "kept with an indifference to utility". The road directly in front of William Meare's Criterion Store (on the left) covered a test hole sunk by an early prospector and this hole subsided in the winter of 1872 to form a bog. The Sydney Morning Herald (12 September 1872) described the scene as narrow, crooked, and filthy.

The photograph is part of the 'Holtermann Collection'. The collection of over 3500 glass plate negatives were stored in cedar boxes, and smaller panels in lacquered tins, in a Chatswood garden shed for over 80 years. The photo collection was discovered and donated to the Mitchell Library in 1952.

The Gold Rush was a period of enormous growth for Australian banking, and was instrumental in the development of many regional towns. 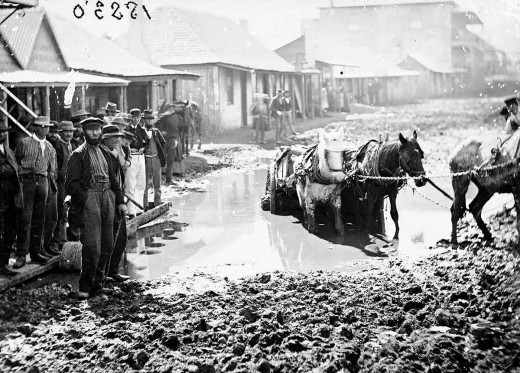