An FBI agent, wearing only tight-fitting swim trunks per instructions given by hijackers, delivers $1 Million in ransom money to Delta flight 841 in Miami in 1972.

There were 7 crew and 94 passengers on board the Douglas DC-8 for the flight from Detroit to Miami. Members of the Black Liberation Army took over the aircraft in flight using weapons smuggled on board, including a handgun hidden inside a bible with its pages cut out to form a cavity. None of the hostages were killed during the hijacking.

Five hijackers who had boarded with three children took over the aircraft. It flew to Miami as originally scheduled, where the 86 passenger hostages were released. The aircraft was then flown to Boston, where they picked up a flight engineer who was qualified to operate the aircraft overseas. Working with FBI agents on-site, Boston Delta airport maintenance foreman Ronald S. Fudge was chosen to refuel the aircraft and deliver the flight engineer to the aircraft. He also delivered a bag containing the $1 million ransom and other bags containing provisions requested by the hijackers, including cigarettes, apples, and ham and cheese sandwiches.

After refuelling and taking on the engineer and provisions, the aircraft was dispatched to the runway and flew to Algeria. Algerian authorities seized the aircraft and ransom which were returned to the U.S. with the crew hostages, but the hijackers were released after a few days. 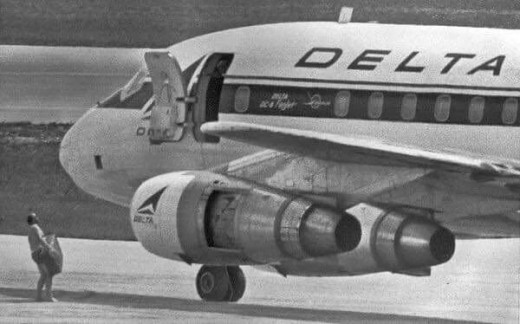 An FBI agent, wearing only tight-fitting