The man sitting on the edge of the gutter, injured and bloodied, is Detective Constable 1st Class K F Gilmour from Darlinghurst Police Station, soon to be promoted to Detective Sergeant.

It was the morning of 'cracker night', 24 May 1957 and Gilmour was later awarded the British Empire Medal in recognition of his bravery on that day. A man named Charles Spiteri had shot two people,killing a man and wounding a woman. Detective Constable Gilmour 'went to the premises with other police; he climbed the stairs to the room in which Spiteri was sheltering and saw Spiteri standing in a doorway pointing a shotgun athim. He called to Spiteri that he was a policeman and told him to drop the gun. Spiteri then aimed his gun at Gilmour and fired, Gilmour firing simultaneously with his service pistol.

Gilmour was seriously wounded in the right arm and had to retire, and it was subsequently found that Spiteri had been killed by the bullet from Gilmour’s pistol'.

The NSW Police Department annual report for 1957 declared that 'in going up the stairs to the room after Spiteri, knowing that he was armed and had already shot one person, Detective Sergeant Gilmour displayed courage of a very high order.'(Report of the Police Department of New South Wales for 1957, Sydney, Acting Government Printing Office, 1958 p.18).

Gilmour also received two other awards for bravery: the George Lewis Trophy for 1957 (a trophy presented each year by a Sydney business for the most courageous act by a member of the New South Wales Police Force); and the Peter MitchellTrust Award for ‘Most courageous act’. The injury to Gilmour’s arm resulted in a permanent disability. 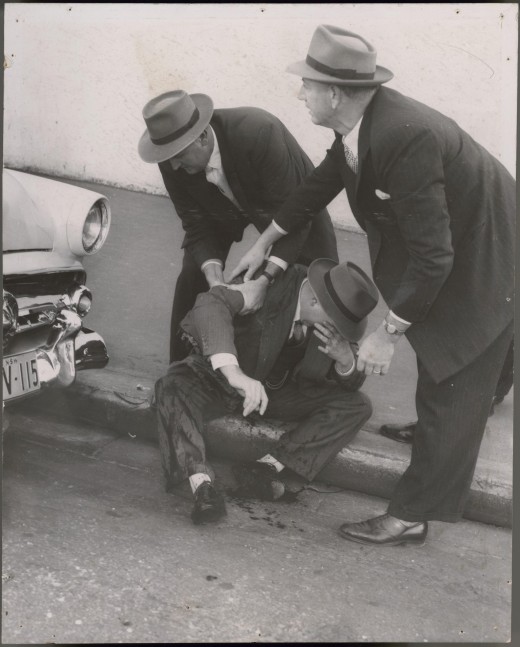