Prisoner identification photograph no. 743 LB. Elsie Bowman was a pickpocket, prostitute and thief and was a close associate of John Brendon Parker,thief and notorious escapee. Bowman's MO as recorded in the NSW Criminal Register, 22 July 1938, includes such details as: 2. Sat down alongside a man on a seat in University Park, Sydney, at night, and stole a sum of money from hisfob pocket. When the man discovered his loss and accused Bowman she handed the money to Alfred Thomas McGovern ... by whom she was accompanied. 3. After having several drinks with a man whom she had picked up in a city street, stole12 pounds from his pockets whilst pretending to feel his privates in the approved fashion of the lower type of prostitute. 4. Snatched at a gold watch chain on a man's vest, but only succeeded in stealing a gold-mounted sovereign, which she later sold to agold buyer. 5. An associate of criminals and prostitutes generally ... 6. Frequents Newtown,Enmore and Darlington. 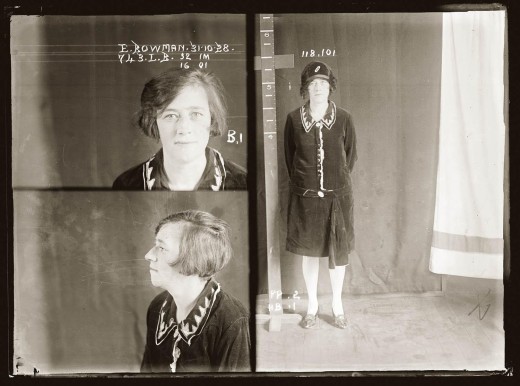