First published in The Sydney Morning Herald on February 29, 1932 (and sourced from SHM archives).

The new underground electric railway stations - those known as the Wynyard and Town Hall stations - were opened for traffic without official ceremony yesterday morning.

Unhonoured and unsung, the first train thundered into Wynyard Station at 6.46 a.m. from Homebush on thelow level station, and four minutes later, on its return journey, it was quickly lost to view in the tunnel. On the first train to come into the very heart of that portion of the city were 70 or 80 people.

Whether they rubbed the sleep out of their eyes at that early hour of the Sabbath - usually an occasion for sleeping in - and boarded the train to claim the distinction of being the first to travel on the latest section of the undergroundopened for traffic; or whether they were pursuing their ordinary occasions, is not known.

The Homebush and the Liverpool trains came in at the low level station, and the Parramatta and Hornsby trains, on the high level. The stream of passengers increased as the day progressed. Thousands of people entered the Wynyard and Town Hall stations merely as sightseers.

Pictured is a crowd standing next to the first electric train in the Wynyard underground station, Sydney, 28 February 1932 (SMH). 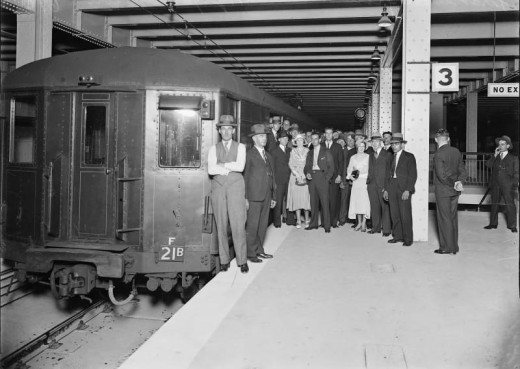 First published in The Sydney Morning He