Frst Banknote issued by the Bank of NSW, 1817 · SOCIAL ARCHIVE ·

Frst Banknote issued by the Bank of NSW, 1817

One of the first banknotes issued by the Bank of New South Wales. April 8, 1817.

The Bank of New South Wales, which later became Westpac, was established in 1817 under a charter of incorporation signed by Governor Lachlan Macquarie. It was Australia’s first bank and first public company.

The Bank of NSW's first depositor, Sergeant Jeremiah Murphy, put in an unusually large sum of money (far more than his official salary) three days before the bank opened. Where did the funds come from? In the year before his mysterious deposit Sergeant Jeremiah Murphy was sent out by Governor Macquarie "in pursuit of natives", suggesting that his funds were attained via nefarious and vile conduct.

Two-hundred years later and Westpac were linked to various paedophilia and other child-exploitation cases that resulted in a 1.3-Billion dollar fine (September 2020). Austrac’s 2019 Westpac investigation revealed programming errors led to millions of suspicious bank transfers not being reported to the watchdog. 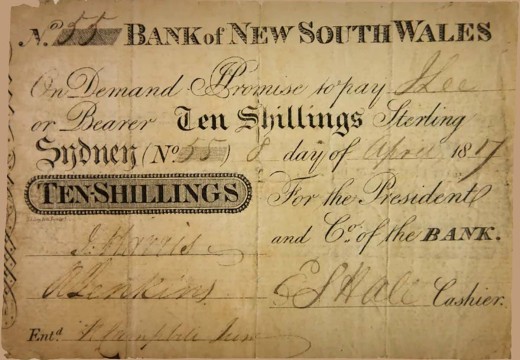 One of the first banknotes issued by the