Glebe Point Road, Glebe, c1908, looking towards Parramatta Road. Most of the buildings in the photograph remain, although without the colonnaded awnings. Note the sign outside the office of W.T. Tate & Dive, estate agents and "valuators", these days known as valuers.

The inner city suburb of Glebe derives its name from the fact that the land on which it was developed was a glebe, originally owned by the Anglican Church. 'The Glebe' was a land grant of 400 acres given by Governor Arthur Phillip to Reverend Richard Johnson, Chaplain of the First Fleet, in 1790.

There was an active tramway on Glebe Point Road between 1892 and 1958 until the trams were replaced by buses. Roadworks near the Bridge Road cross in late 2009 uncovered a section of the original tram tracks. The City of Sydney Council has left these exposed to serve as a historical reminder. 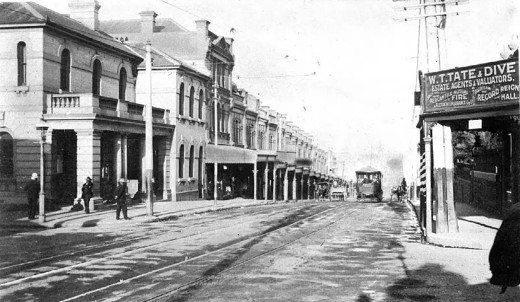