The Government Savings Bank of NSW. Bowral. 1916. The landmark Bowral building opened as banking premises in 1892.

On the corner of Bong Bong and Wingecarribee Streets, the site was purchased in August 1890 by the English, Scottish and Australian (ES&A) Bank. In February 1900, the Bowral branch of the ES&A Bank closed, transferring to Moss Vale which had also grown as a consequence of the developing railway. In September 1912, the Government Savings Bank (GSB) of NSW purchased the former ES&A building in Bowral from Mr F R Macpherson for 1800 pounds.

The building went through a number of changes though sales and merger, finally ending up as a Commonwealth Bank branch, although they have also since relocated.

The building now sites adjoining Bowral's Corbett Plaza, and at the time of writing is home to retail fashion outlets. Directly opposite the building is another amazing Bowral landmark, The Grand Hotel. The hotel made the very first deposit back in 1892. 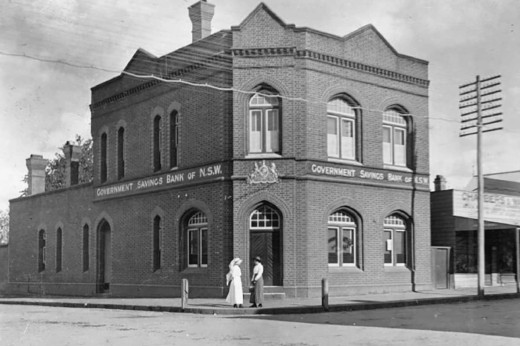