The body of John Dillinger is exhibited to the public, Cook County Morgue, Chicago, July 22, 1934. An estimated 15,000 people viewed the corpse over a day and a half.

John Herbert Dillinger (June 22, 1903 - July 22, 1934) was an American gangster during the Great Depression. He led the Dillinger Gang, which was accused of robbing 24 banks and four police stations. Dillinger was imprisoned several times and escaped twice. He was charged with, but not convicted of, the murder of an East Chicago, Indiana, police officer, who shot Dillinger in his bullet-proof vest during a shootout; it was the only time Dillinger was charged with homicide.

Dillinger courted publicity. The media ran exaggerated accounts of his bravado and colourful personality and cast him as a Robin Hood. In response, Edgar Hoover, director of the Bureau of Investigation (BOI), used Dillinger as a campaign platform to evolve the BOI into the Federal Bureau of Investigation, developing more sophisticated investigative techniques as weapons against organized crime.

After evading police in four states for almost a year, Dillinger was wounded and went to his father's home to recover. He returned to Chicago in July 1934 and sought refuge in a brothel owned by Ana Cumpanaș, who later informed authorities of his whereabouts. On July 22, 1934, local and federal law-enforcement officers closed in on the Biograph Theatre. When BOI agents moved to arrest Dillinger as he exited the theatre, he tried to flee. He was shot in the back; the deadly shot was ruled justifiable homicide. 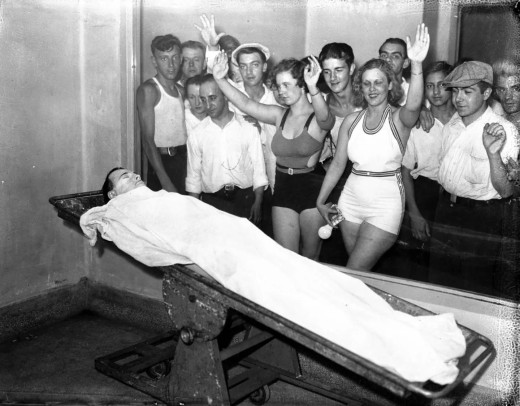 The body of John Dillinger is exhibited