On the 30th September 1813 the 'holey dollar' and 'dump' coins became legal tender in NSW.  Governor Macquarie faced currency shortages soon after his arrival in the colony. The British Government bought 40,000 dollars worth of Spanish coins in India and sent them to NSW in 1812. Macquarie commissioned convict forger William Henshall to cut the centre (the dump) out of each coin and stamp them with NSW. The smaller 'dump' was worth fifteen pence and the larger 'holey dollar' (with a hole in the centre) was worth five shillings.

Although these coins became legal tender on 30th September they were not available for general issue until January 1814.

The coins were used to put an end to the drunken 'rum currency' (common for the population of Sydney at the time, which was little more than 10-thousand non-indigenous inhabitants).

If you look hard enough you still might find these coins buried in certain parts of Sydney. 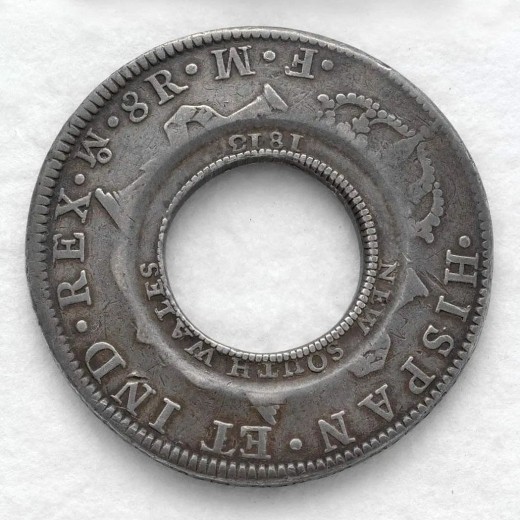