Police dog Tess is shown in this image in a training exercise at the Bourke Street police barracks with her trainer, Constable First Class Bernard Ross Symons. He is wearing a protective suit of sacking over his regular clothes and holdinga gun in an aggressive stance. The padding was necessary because Tess was trained to attack and bite, to put her whole heart into the job (ref: C. Bede MaxwellThe cold nose of the law, Sydney, Angus & Robertson, 1948 p.65) When Tess joined the NSW police in July 1933, along with another Alsatian named Harada, they were the 'first fully qualified police dogs in the Commonwealth'. (Sun 4July 1933 p.11) After her death, in December 1940, her body was preserved by taxidermists from the Australian Museum. She was an exhibit in the Australian Museum for 25 years before being transferred to the then Police Museum at Redfern. 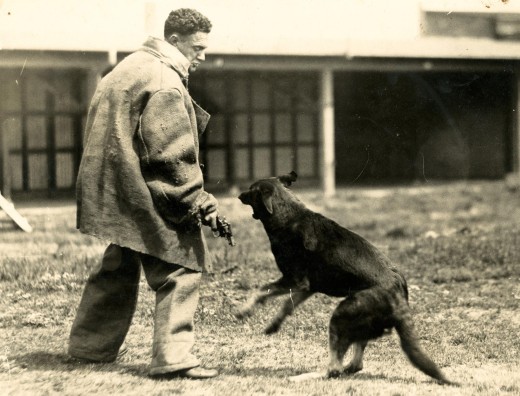 Police dog Tess is shown in this image i