The first Sydney Post Office operated from the home of the first postmaster, Isaac Nichols, in lower George Street. The photographs shown was taken a few years before the building was demolished in 1889 (State Library of NSW).

As the population of the colony grew, so did the volume of incoming mail. When ships arrived in SydneyCove they were mobbed by people searching for letters and parcels.

By 1809 there were escalating complaints to the Lieutenant-Governor of fraud,theft and extortion at the docks. The New South Wales Corps, which had deposed Governor Bligh in 1808, moved to rein in the chaos by appointing an official postmaster.

On 25 April 1809 Isaac Nichols, an emancipated convict, was appointed as Postmaster, a position that authorized him to board ships and receive letters and parcels addressed to people within the colony.

He was ordered to establish an office at his home in George Street, where letters could be picked up and the collection prices would be fixed.

On 26 June 1809 Isaac Nichols boarded the brig Experiment and collected the first bag of mail from Britain. This is recognized as the birth of the postal system in Australia.

Isaac Nichols was born on 29 July 1770 at Calne, Wiltshire, England. At the age of 21, he was found guilty of stealing and sentenced to seven years transportation. Nichols arrived in Port Jackson on 16 October 1791.

Nichols was hardworking and possessed the rarest of convict qualities, sobriety. His honesty and diligence impressed Governor Hunter, who appointed Nichols as the Chief Overseer of convict gangs in Sydney.

In 1797 Nichols completed his sentence and Governor Hunter granted him 50 acres (20 hectares) of land in the Concord district.

The rise of Isaac Nichols was meteoric. In 10 years, he increased his land holdings to 1400 acres (566 hectares), opened an inn on George Street, established a shipyard and built the Governor Hunter, a 33-ton trading schooner.

By 1806 Nichols was one of the wealthiest businessmen in the colony. 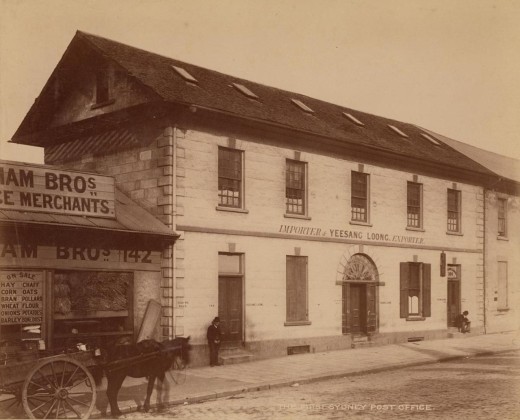