The introduction of the new decimal currency in Australia also marks the first Aboriginal copyright dispute. In February 1966, Adelaide's Advertiser newspaper revealed that the Reserve Bank had not sought permission from the celebrated Arnhem Land artist David Malangi when it reproduced his work on the new A$1 note. Alongside the figures and kangaroos inspired by rock-paintings, the entire left-hand side of the note was copied from Malangi's bark painting, Mortuary feast of Gurrmirringu.

While the media had a field day, the bureaucrats quietly tried to smooth things out. Malangi was found, then disappeared again. Finally, in a short ceremony in 1967, Malangi met “Nugget” Coombs, the then Reserve Bank Governor, who presented him with A$1,000, a medallion and a fishing kit. 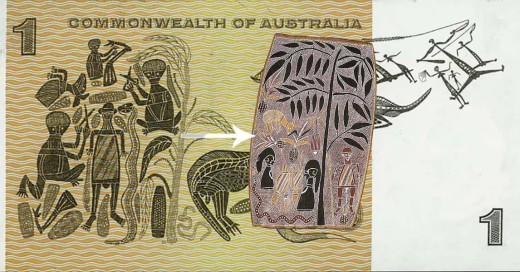 The introduction of the new decimal curr