The most popular variant of Bill Bernbach's "Think Small" Beetle advertisement features a bare background, with only the VW Beetle in view to shift the reader's focus to the vehicle immediately. Voted the most influential ad of the 20th Century, Bill Bernbach positioned the Beetle as anti-establishment - a sort of against-the-grain, hipster car. Keep in mind that the Beetle was designed and built in Germany only 15 years after the war (and sold in the US).

Ogilvy said the following of the advertising: "To advertise a car that looked like an orthopaedic boot would have defeated me. But Bill Bernbach and his merry men positioned Volkswagen as a protest against the vulgarity of Detroit cars in those days thereby making the beetle a cult among those Americans who eschew conspicuous consumption".

The advert is a brilliant example of positioning, headline, creative, and success (see our website for variations on the theme).

Creative aside, what do you think of when you hear "We'll Save You" (said in a nasally voice), or "Which Bank?" Clever advertising can take ownership of a phrase in common language giving rise to brand awareness.

The campaign has been considered so successful that Portland Business Journal said that it "did much more than boost sales and build a lifetime of brand loyalty [...] The ad, and the work of the ad agency behind it, changed the very nature of advertising... from the way it's created to what you see as a consumer today".

The definition of extraordinary is the opposite of what everybody else is doing. Make creative great again! 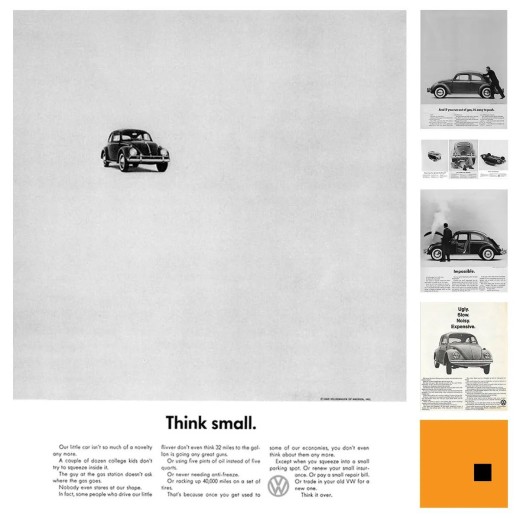 The most popular variant of Bill Bernbac