Sliced Bread Was Invented in 1928

Sliced bread was 'invented' by Otto Frederick Rodwedder (1880 - 1960) on July 7th, 1928. While bread - and indeed 'sliced bread' - has been around for thousands of years, the consumer confidence in sliced bread is less than a century old. Rodwedder simply introduced a reliable machine and marketed his product in the right way at the right time.

Rodwedder conduced a large amount of market research to determine how thick a slice of bread should be and settled on about half an inch thick. He applied for patents and sold his machine to baker Frank Bench in Missouri. In 1928, the Chillicothe Constitution-Tribune, where the Chillicothe Baking Company was located, published an advertisement with the headline, "Sliced Bread Is Made Here." The advertisement references a "power-driven multi-bladed bread slicer" capable of performing an impossible feat - slicing whole loaves of bread at once. This was the first-ever reference to sliced bread in print. It offered instructions for the consumer, suggesting they should "open [the] wrapper at one end" and "pull out the pin" to access a slice of bread. It also called sliced bread "the greatest forward step in the baking industry since bread was wrapped" (thus the expression, "the greatest thing since sliced bread"). Before long, major baking companies joined the trend of making sliced bread. Within a few years, bakeries were producing more sliced loaves than unsliced loaves.

Alan MacMasters of Scotland created an electric device he called the "Eclipse Toaster" in 1893 before sliced bread was commercially available. However, it was the convenience of the sliced loaf that popularised its use. Sliced bread literally created a new industry.

The reason this story is relevant is because we still see massive gaps and opportunity in the market for brokerage, franchises, aggregators, and others, to take what they've got and reinvent the (often) antiquated methods of product delivery (and marketing, of course) - it's what we try and do every single day. 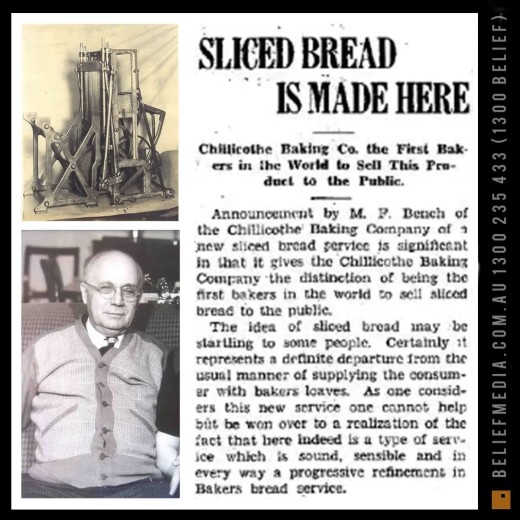