Special Photograph no. 1606. This photograph was apparently taken in the aftermath of a raid led by CIB Chief Bill Mackay - later to be Commissioner of Police - on a house at 74 Riley Street, 'lower Darlinghurst'. Numerous charges wereheard against the 15 men and women arrested. Lessee Joe Bezzina was charged with 'being the keeper of a house frequented by reputed thieves', and some of the others were charged with assault, and with 'being found in a house frequentedby reputed thieves'. The prosecution cast the raid in heroic terms - the Chief of the CIB, desperately outnumbered, had struggled hand to hand in 'a sweltering melee in one of the most notorious thieves' kitchens in Sydney'. The defence, on the other hand,described 'a quiet party, a few drinks, some singing ... violently interrupted by a squad of hostile, brawling police' (Truth, 29 January 1928). The gallery was packed with friends of the accused, who loudly jeered the prosecution and police witnesses. 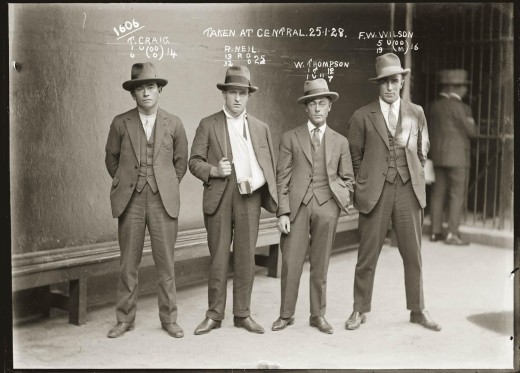 Special Photograph no. 1606. This photog